Artcommune’s latest exhibition celebrates the visual artistry of Singapore’s beloved ink painter, Lim Tze Peng. The nonagenarian, who dedicated almost his entire life to painting and calligraphy, was finally compelled by old age to store away his brush for good last year, pulling the brake on a seven-decade long art journey. 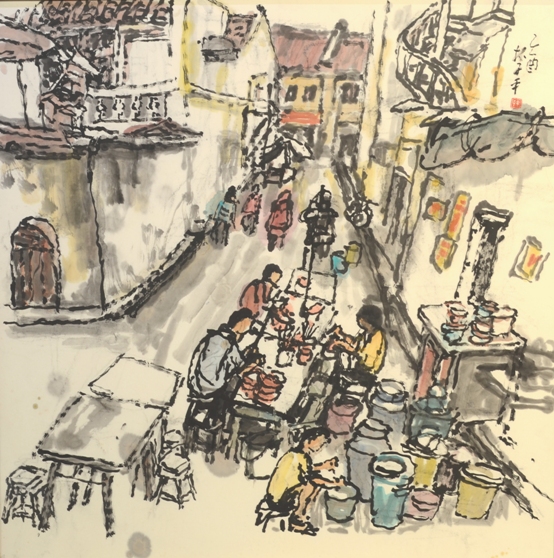 Born in 1921, Lim Tze Peng became a full-time artist after retiring as the principal of Chung Cheng High School in 1981. Over the years, he has enjoyed critical and commercial success with his nostalgic ink compositions of Old Singapore landscapes as well as a growing body of modern calligraphy. For his invaluable contribution to Singapore’s artistic heritage, he was conferred the Cultural Medallion by the Singapore government in 2003 and was most recently awarded the Meritorious Service Medal during last month’s National Day.

This exhibition features 25 paintings of varying periods and subject matters including his early ink paintings of Old Singapore scenes (1970s – 1980s); ink paintings of Bali (1990s – mid-2000s); trees-inspired series (mid-2000s – early 2010s); and a progressive body of calligraphic work that attests to his bold endeavour in re-interpreting centuries-old traditions (mid-2000s – 2015). The artworks on showcase aim to reflect Lim Tze Peng’s growing forays and aesthetic transformation from the late 1970s to the recent period. Particularly noteworthy among the displays is his gigantic 2006 painting, Boats which spans 3.9m in length (1.6 x 3.9m). Expansive in size and expressive in brushstrokes, this huge painting based on Singapore River’s iconic bumboats was exhibited at the National Art Museum of China during the artist’s first solo exhibition in Beijing in 2008.