“Frame x Frame” is a new film series initiated by The Arts House to showcase and explore the different dimensions of Singapore cinema. This quarterly programme is running from now till Mid December 2012. Good to see an Art Venue taking the effort to feature first-run screening of upcoming films as well as retrospectives of noted filmmakers. 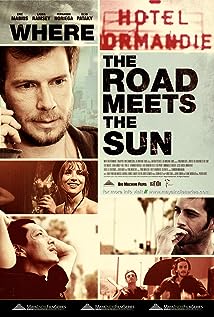 "Where the Road meets the Sun" is based on four main characters with very different backgrounds & outlook of life:
Blake (Eric Mabius), an American manger of a backpacker hotel ,who is haunted by sad memories.
Takashi (Will Yun Lee), a Japanese with a dark past who went to Los Angeles (LA).
Julio (Fernando Noriega), a Mexican who went up north to seek a better future.
Guy (Luke Brandon Field), a British bloke who end his holiday unexpectedly.

The storyline of the various characters do not gel up till somewhere in the middle of this film. The film-maker might have done this on purpose, for character development during the first half of the movie, but I would say it was a rather confusing as I sat pondering in the dark, how does the four character relate to each other. We hope that audiences with short attention-span will not be impaitient and walk out halfway.

The film inter-cuts between the blossoming of these two friendships:
Takashi tries to assist Blake to put away his past, but in the process, Takashi is forced to confront his own violent memories. Then Julio and Guy hustle for day to day survival and forge dreams of a better future.

All four men are trying to survive – both emotionally and physically. However, this is not a “Bromance” movie.

The core meaning of this movie is human seeking a “desirable life”, whether you are aware or not aware of what kind of life you seek. The process of seeking could itself be the desirable outcome of life. Because life might not have a clear destination for you, likewise this movie ends with partial closure leading the audiences to insight to the characters’ next chapter in life.

The film maker, Ms Yong Mun Chee, was given access to a fine cast –
Eric Mabius is fairly prolific TV actor; he played “Daniel Meade” in “Ugly Betty”. Will Yun Lee is also a prolific actor, whom you would have seen acting with Hugh Jackman soon as in “The Wolverine” (2013), as “Kenuichio Harada / Silver Samurai”. Fernando Noriega is a talented actor, who appeared in a list of Mexican TV series.

I personally like the cinematic shots in some scenes – lonely nights of LA, the view of LA from the roof top as the Sun rises…etc. Overall I would give this film better than average rating.

About The Film Maker – Ms Yong Mun Chee:
Born in Singapore. She won a scholarship to study economics at the London School of Economics. After she returned to Singapore to be a broadcast journalist, she won the Asian Television Award for the documentary Extraordinary People.

She moved to Los Angeles in 1999 and received her MFA in Film Production from USC. Her thesis film 9:30 won a DGA award, a CINE Golden Eagle Award and a Special Jury Award at SXSW.Where the Road Meets the Sun is her feature directorial debut.

The screening will be preceded by “9:30”, Yong Mun Chee’s award-winning thesis short film.

Currently showing at The Screening Room
Presented by The Arts House, as part of their “FRAME X FRAME” series