Set to an original piece of music by Affixen (Victor Low) and Andy Yang – MoonGrazing is a surrealistic abstract animation that playfully explores the moon and its stories through the eyes of the illustrators and friends from OICsingapore. 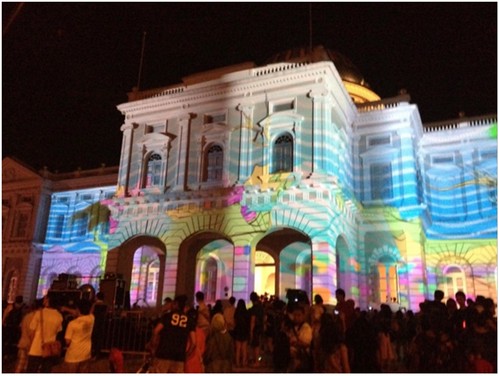 The languid heat of the August nights and the shimmering array of lights unfold as 2013’s Singapore Night Festival comes to an end. The facades of the National Museum of Singapore was lit and transformed into a lively projection board and mental canvas for both illustrators and audience.

MoonGrazing is a quirky, darkly delightful animation which the moon acts as a machoistic, focal point for the whimsical and surrealistic narratives. The different phases of the moon are personified and illuminated in different lights of expressions. The moon takes various lights and shapes throughout the course of the narrative where the innocuous crescent moon metamorphoses into a macabre Chesire-like grin. The metamorphosis and dark phases of the moon are set devilishly and eerily alongside Affixen and Andy Yang’s original score, whereby the animation and the live music spontaneously and whimsically accentuate the theme of foreboding darkness.  The moving illustrations and animation plays well with the potential of its space, exploiting the night sky along Stamford Road and the façade of the National Museum to blur and meld the lines between the real and the absurd. Increasingly, the spatial reality and dimension plays with the polarizing themes of reality and imagination. The focus on the moon and the timely coming of Mid-Autumn Festival seems to allude and suggest the real and the absurd or imagined where the Chinese myths associated with the Mooncake Festival act as a backdrop and an added layer to the narrative. 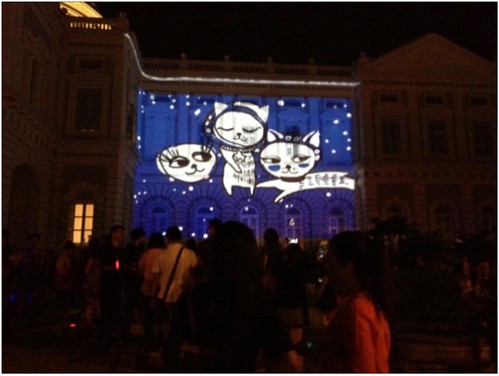 On the whole, it was a quirky night experience where the illuminated night sky and citylines of Bras Bersah transformed into a strange, surrealistic Wonderland of night lights.  I felt like an Alice peering through the looking glass where the old and tired was novel and new again.