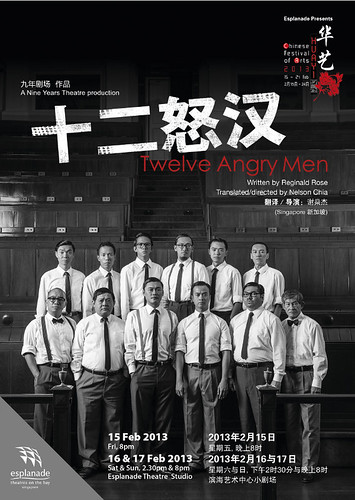 If you speak or understand the Chinese language, how many performances or plays in Mandarin have you watched recently or before, that have left you in awe and speechless?

Twelve Angry Men was performed last weekend (15th to 17th Feb 2013) at the Esplanade Theatre Studio for a total of five shows (matinee and evening performances). They were all sold out. It may be due to the fact that it was the annual Huayi Festival by Esplanade, but I think many in the audience were curious to find out how an English television play, written by Reginald Rose in the 1950s, would be like, performed in Mandarin, by a young local theatre company, in Singapore.

Adapted by Reginald Rose from his 1954 teleplay of the same name, Twelve Angry Men, translated and directed by Nelson Chia, takes you deep into the tensions of this compelling courtroom drama classes as the jurors grapple to reach a unanimous decision.

Created by the team behind Who’s Afraid of Virginia Woolf? (Huayi 2012), and brought to you by the newly established Nine Years Theatre, Twelve Angry Men unites 12 male actors from Singapore’s theatre scene in this provocative classic.

The audience were not disappointed. The verdict: Nine Years Theatre is guilty of bringing Mandarin performances to another great height in the local art scene.

Twelve Angry Men is the story of how twelve jurors of varied societal backgrounds were to arrive at a unanimous verdict regarding a young boy who had been charged with the murder of his father. A seemingly straight-forward case soon turned into a heated debate as prejudices and ignorance informed the views of these characters.

The 12 actors are no doubt the soul and energy of the whole play. Some have more lines than others, more anger, more “air-time”, but there is no competition among the 12 actors. Instead, we see smooth chemistry and collaboration. As a teleplay, the camera zooms in for the audience on emphasis the director may have intended. On stage, the actors’ performance determines our zoom lens. I love the subtle movements among all 12 actors on the small stage, it was brilliantly choreographed. 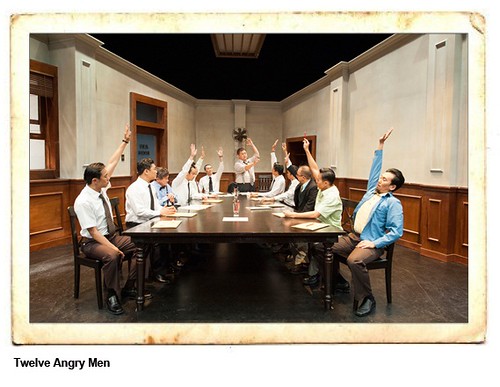 Besides the human actors who have lines and actions, what contributed to sync the high and low mood of the characters to the audience are the set, lighting and sound design. Yes, they are not just made, they are carefully planned and designed by Wong Chee Wai (set design), Lim Woan Wen (lighting design) and Darren Ng (sound design). The first thing that caught my eyes is the big table in the centre of the stage. It is a big rectangular table to seat the 12 men, but it is constructed with perspective. So are the walls on the two side of the room. It creates a wider angle to the eyes and an illusion to the depth of the room. The details on the wall panels, the doors and windows put the audience right into the play. Oh, and it rained, inside the theatre, on stage. 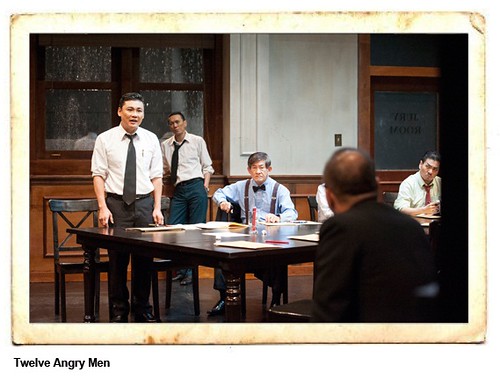 The lighting designed by Woan Wen always make me forget that I am seated in a theatre watching a play, and that they are controlled. They appear so smoothly and naturally, complimenting the acting and each scene. The florescent lights in the room filled up the intensity of the climax and at the end, played a sad tune when the story unwinds to the realisation of the last juror who finally changed his vote. It resembles a sympathetic feel to the character. It was harder to “watch” the performance of the sound because the actors are obviously louder. However, without designed sound, the play would lose the essence of the set and atmosphere. A few obvious designed sounds include the antique fan and the flickering of the fluorescent lights. I personally love the sound of the rain; it is like a half-time for the play, a cue for a scene change. Then when the actors close the windows, the sound of the rain gets different – there, we watched the sound “perform”. 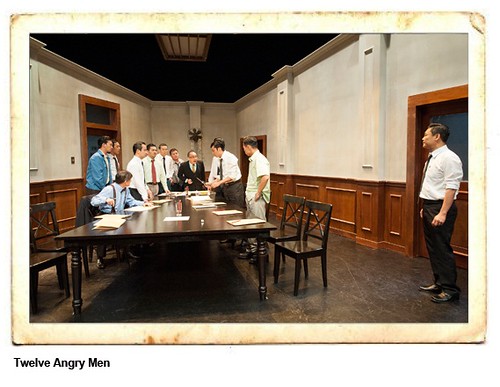 I want to thank the production crew for this wonderful evening.

Before the performance starts, I managed to interview Director Nelson Chia and have him share some interesting points with Artitute readers on the production of this performance:

K: The original text is in English and you did the translation on your own. What are some of the interesting encounter in your attempt to translate the whole play?

N: Besides the attempt to retain the tone and dramatic tension of the original text in my translation, one interesting thing I found about translating scripts from English to Mandarin is that it is not that easy to find equivalents of swear words between the two languages. English swear words are aplenty but most of them sounded mild in daily conversational context but Mandarin swear words seem to evoke more severe reactions when uttered.

K: This is Nine Years Theatre’s first production and it is a play with quite a number of characters, twelve exactly. How do you, as a director of the play, manage the balance in areas such as quality acting, chemistry among the actors and perhaps, the temperament of the characters?

N: Well, the truth is, I do not intentionally try to balance out these things in this case. Of course I do try to achieve a uniform stage language in the creation of the world of the play, but I am at the same time interested in using their varied qualities and temperament to create twelve very different characters who are distinct in their own way.

K: The performance on stage is the result of the long hours of rehearsals, are there any special or unusual training techniques you may have involved in the rehearsals for your actors in this play?

N: Before the start of the actual rehearsals, we had five sessions of workshops where I made them experience some of the basic exercises in the Suzuki Method of Actor Training before we sit around the table and read the play together. Since the Suzuki Method requires long periods of regular practice for the training to affect the actors’ body, I was obviously not expecting the actors to even begin appreciating it within five sessions of workshops. What I had intended was just for the actors to try doing the training together, to experience doing some repeated exercise as a group in order to develop some bond. However, as the Suzuki Method was also a training which I believe has tremendous effect on developing strong physical core, breadth control and inner sensibility, introducing it provided a common language between the actors and me when I am directing them.

K: You are also a trained and experienced actor, if you are acting in this play, which character would you like to be, and why?

N: The old man. He sits there and doesn’t move much but he gets to be the one who brings up the last important point that totally undermines the strongest evidence in the case!

K: Who is the best angry man among the twelve? <—— Just kidding! But you can answer it too!

N: None. This bunch of actors are all too patient and kind to me. 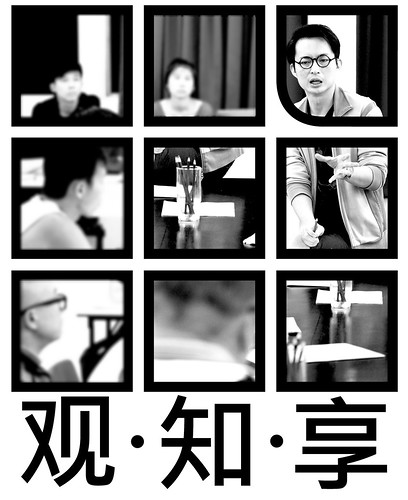 What Is A Classic Realist Play?

Nine Years Theatre’s “Knowledge Sharing Platform” aims to share knowledge of theatre with audiences through informal dialogue. In this session, artistic director Nelson Chia will discuss issues such as the definition of “classics”, realism in theatre, and appreciation of classic plays.

The company believes in the accumulative process of art. This is reflected in their three-prong artistic direction: They are concerned with the development of their creation, with the issues of long-term, regular actor training, and the building of audience-ship through knowledge sharing. The name “Nine Years” is symbolic of their commitment to grow these efforts year by year.

Nine Years Theatre does not limit its range of productions by genre and scale. They aim to create works that are essentially actor-centred, that challenge the nature of the actor’s art in productions, and ultimately, question the notion and the state of the Mandarin theatre.

Nelson Chia is an actor, director and theatre educator.

He graduated with a BA(Hons) from the Theatre Studies Programme of the National University of Singapore and an MA in Theatre Arts (Directing) from Goldsmiths College, University of London.

Nelson had worked with numerous English and Mandarin theatre companies in Singapore as an actor and director. He was a Resident Artist with The Theatre Practice from 2000 to 2002, the Associate Artistic Director of Toy Factory Productions from 2003 to 2013, an Associate Artist with The Substation from 2007 to 2009, and a founding member of the ensemble collective A GROUP OF PEOPLE, which focuses on actor training and the creation of performances in a collaborative environment, from 2008 to 2012.

He had lectured at and headed the Department of Theatre at the Nanyang Academy of Fine Arts, taught classes at Lasalle College of the Arts and was a full-time lecturer at the Theatre Studies Programme of the National University of Singapore.

Nelson has been training regularly in the “Suzuki Method of Actor Training” since 2008. He had studied the method with SITI Company in New York and the Suzuki Company of Toga in Japan.