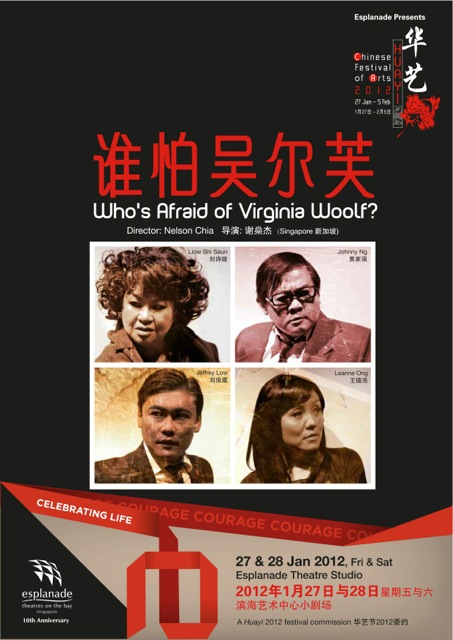 This production strives to bring back the allure of great realist classics in Mandarin through the power of strong characterisation, exquisite language and compelling performances by the actors. 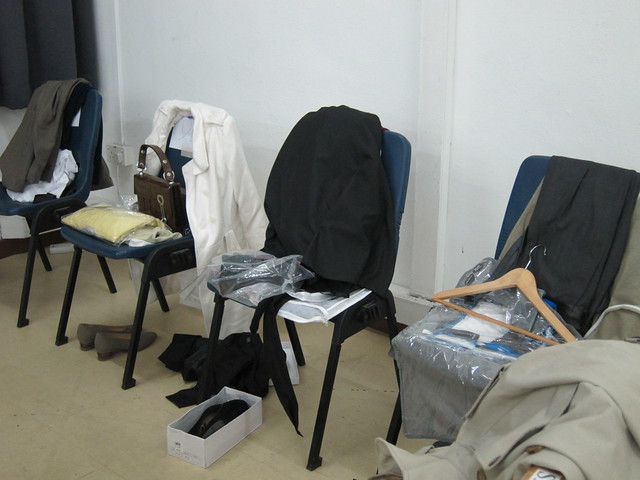 An elderly professor, George, and his wife, Martha, invite university newcomer, Nick, and his wife, Honey, over to their place for a late night party. As the night passes, they find themselves caught in the middle of a marital conflict. Fuelled by alcohol and using language as weapon, they are compelled to blemish, hurt, seduce and manipulate, in order to wound their opponents. In the end, mad lies become their only hope. How will this night of torment end?

Truth and illusion—can we tell the difference between the two? Do we have the courage to live in a world with no illusion but our true self? 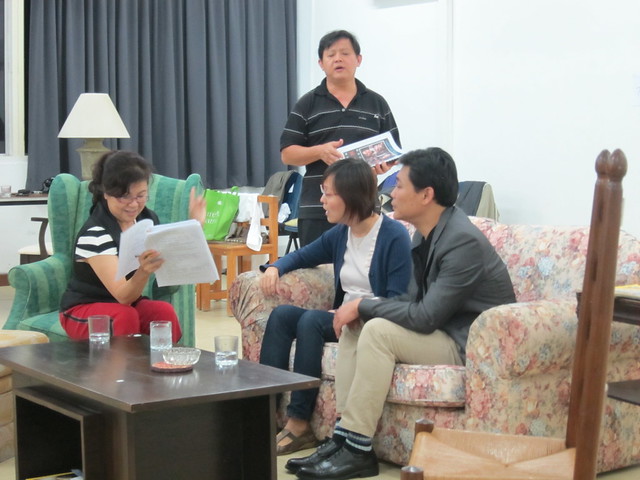 The group has been working hard for the past one month and the Artitute writers are fortunate to be able to attend one of the rehearsals for this play at Emily Hill. During the 3-hours long rehearsal, we experience the interesting discussion between the Director and the casts; the intensity and seriousness of the talented actors and we are amazed at how direction of a play is done.

From 8pm to 11pm on a Wednesday, it is usual for the group to gather, almost daily for the past one month for the rehearsals. Everyone has a full-time day job, but their spirit and energy is still high despite the late evenings. 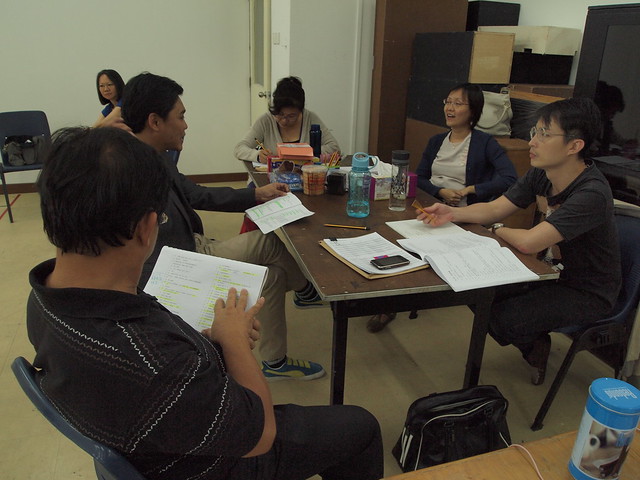 Director Nelson Chia was invited by Esplanade to feature a production for Huayi Festival 2012. He then decided and proposed to direct Who’s Afraid of Virginia Woolf? – which he feels strongly about bringing an old classic back on stage for the audience. He explains that this play provides a strong platform for actor’s basic training draft and basic standards for theatrical appreciation. For Edward Albee to have written a play like this in the early 60s, it is considered very avant-garde. The play is heavy on text and the representation of the meaning of the text, to Nelson, good veteran actors will be the best candidates to deliver the essence of this play. 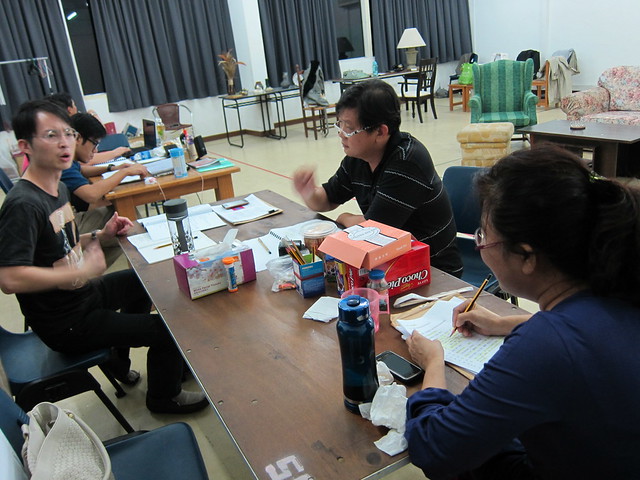 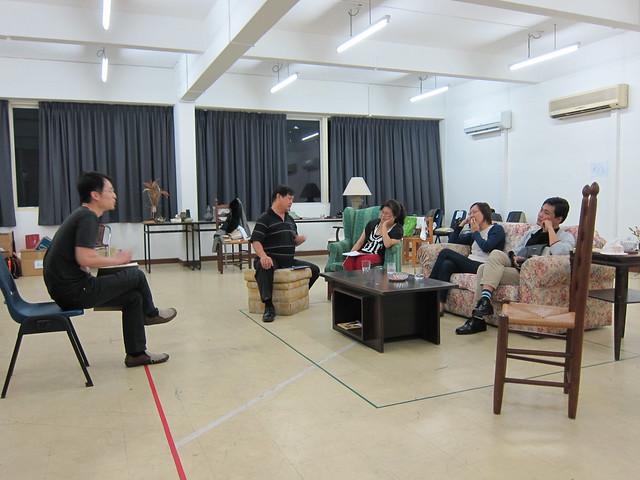 Speaking of the casts, another objective for directing this play is Nelson’s hope to have some of these veteran actors back into the lime light.  Johnny Ng (黄家强), Liow Shi Seun (刘诗璇), Leanne Ong (王德亮) and 883 Jia FM DJ, Jeffrey Low (刘俊葳) are taking on the roles of George, Martha, Honey and Nick, respectively.

Many details were taken into considerations during the rehearsal. We watched with amazement the same scene replayed many times, but each time, more refined, more detailed, more interesting.  A simple few words from the Director, a description of a certain feeling being mentioned after each try, the actors were able to deliver the required reaction. Nelson tells us that he will never “act” for the actors, instead, as a director, he will only put in words, in questions, for his actors to understand. We watch how Nelson directs George in the scene where George is at the point of scheming a plan to hurt Martha. The first run was merely in the form of script-reading. It was enhanced after, with the actor’s change of focal point, standing position, intonation of his lines, his expression, his understanding of what the character is feeling. 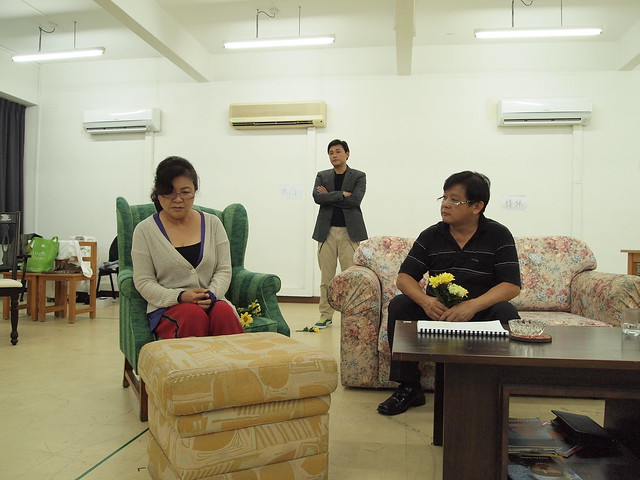 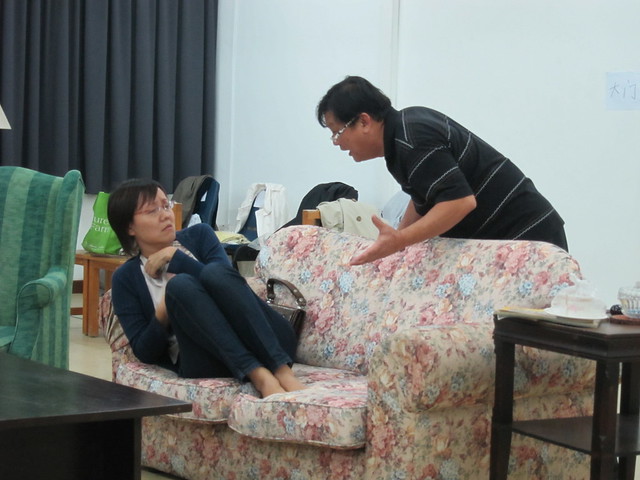 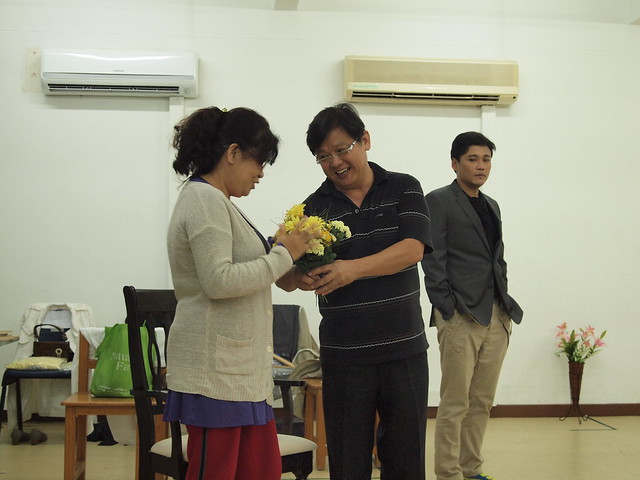 A play on stage is different from the movie as you do not have the zooming and close-up facilities, neither the ability to restrict viewers’ frame. It depends a lot on the Director’s call to provide a clear structure for the actors, creating a tempo for the play to flow through. Of course, it is also important to have good lighting and sound designers who can enhance the overall spatial effect. 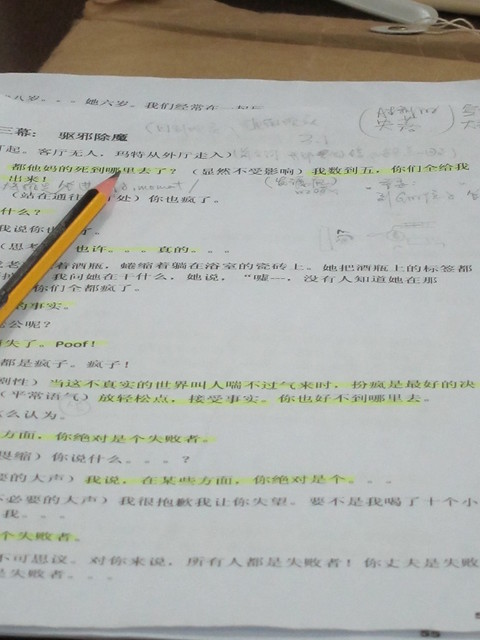 Be brave and face the reality, get your tickets to watch this play!