Everything That Has A Point Makes A Circle is Sai Hua Kuan’s homecoming exhibition after living in the UK for six years.

Everything That Has A Point Makes A Circle is Sai Hua Kuan’s homecoming exhibition after living in the UK for six years.

Presented by Yavuz Fine Art, this succinctly curated collection presents Sai’s progress as an artist, bringing together a varied body of work that has evolved over the years. Sai has developed a discrete visual language over the past fifteen years: at once both bold and whimsical, his original style involves the deliberate minimalist placement or juxtaposition of found objects that engage viewers with their witty, inexplicable quality. Presenting a study of contrasts, of both dialectics and polemics, the viewer is invited to ruminate over works that do not present themselves for easy resolution. Everything That Has A Point Makes A Circle explores the idea of a journey, which has no beginning and end to it. Both title and exhibition reflect Sai’s long fascination with space and time, of which a circle is defined by both elements. 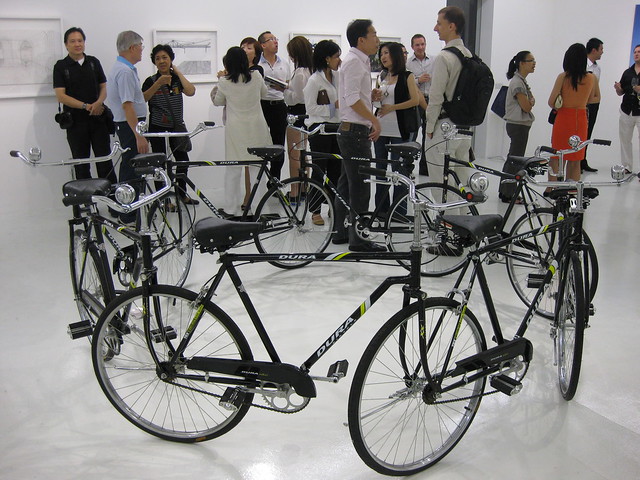 Each piece is imbued with a sense of playfulness, an apprehension of daily life and Sai’s own nonsensical notions. Movement is either expressed or alluded to in the photographs and installations.

One of the main works in this exhibition is the video entitled Space Drawing No.7. A visual and aural assault, a rope pulled taut springs into life and is sent flying on a wild journey through what looks like an abandoned warehouse. As the rope ricochets off walls, snakes across dusty floors and reels round pulleys and pillars, the hypnotic cacophony lures our attention to the details of the abandoned spaces where the video was made.

While Space Drawing is compelling, striking and energetic, by contrast, Sai’s recent works are the apotheosis of motion stilled. Using everyday objects such as a bicycle or a hammer, these materials though simple, profoundly resonate of the theme. The sculpture No Turn is composed of two bicycles welded together facing each other, comprised of only three wheels. While pleasing in its balance and proportion, the work throbs with an underlying tension beneath its serene surface. Because in this work, there has been an imagined collision of two opposing powers, something immutable has occurred but notwithstanding this clash of energy, the piece conveys a sense of paralysis, an inability to move. Its equivocality thus presents a conundrum.

Elaborating on this subject, the larger bicycle sculpture entitled Going Somewhere 01 presents an intriguing apriorism. Sai has welded together eight bicycles to form a circle. While there is a suggestion of movement derived from the title, this literal merry-go-round in fact takes the rider nowhere. It is a tongue-in-cheek work that exposes the Sisyphean nature of the activity, consigned to an eternity of useless efforts and unending frustration. 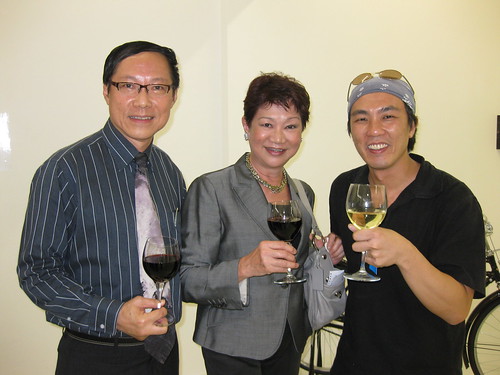 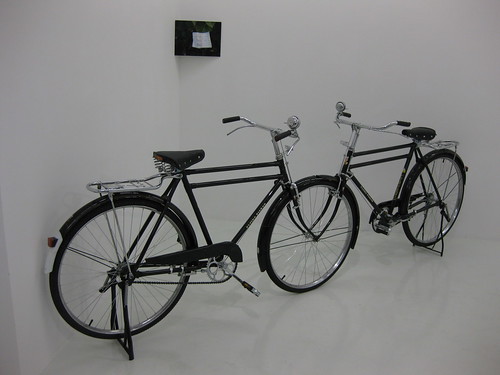 This never-ending toil is mirrored in Sai’s other works. A series of photographs, They Will Still Be There Next Year captures labourers in Chengdu, China transporting enormous sacks of goods. In one photo, the human figure is practically obscured by the massive sack on his back. These affecting works are a stark reminder that this is the reality of earning a living in many parts of the world. Like the futile pedaling of Going Somewhere 01, the back-breaking drudgery of these labourers shines a spotlight on the sophistry of why and what we labour for.

Sai Hua Kuan (b. 1976) has exhibited extensively at international venues that include International Festival for Arts and Media Yokohama (2009, Japan), EV+A (2010, Ireland), Moscow International Biennale for Young Art (2010, Russia), 14th Media Art Biennale WRO (2011, Poland) and Luleå Art Biennale (2011, Sweden). In 2007, he received a Masters degree in Fine Art from the Slade School of Fine Art in London. He currently lives and works in Singapore.

Exhibition Name: Everything That Has A Point Makes A Circle
Exhibition Dates: 2 March – 15 April 2012