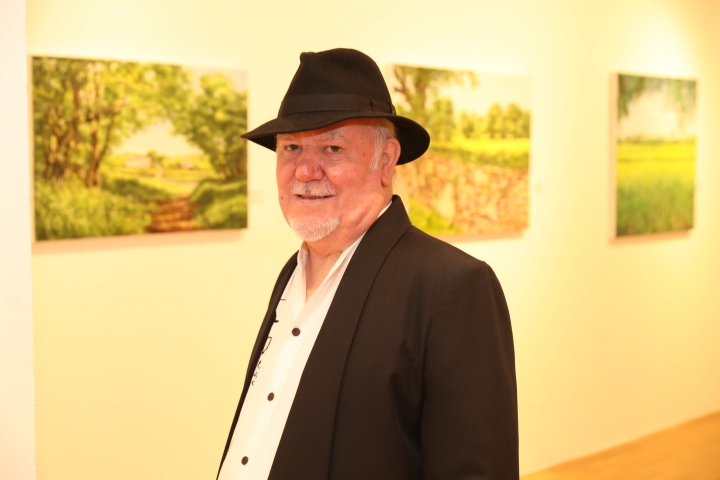 Your name rings a bell, I said to Adams as he walks into the cafe where we met for our chat. You must be thinking of the musician; it’s quite normal, he said as a matter of fact, you’re not the first. I blush at my faux pas; indeed, I was thinking of Bryan Adams, the Canadian songwriter. My Brian Adams does look like a music type sporting a silver pony-tail and a fedora. His face is framed by an exquisitely trimmed salt and pepper beard; more salt than pepper, he said when I complimented him. His wife, Jasmine pulls out a photograph of Adams taken by an acquaintance. He did you justice, she said with a smile and proffers the iPad for Adams to have a peek. He nods in approval.Brian Adams was born in London in 1938. Married to Jasmine, a Singaporean Peran-akan of Chinese descent, he has made Singapore his home since 1996. Adams sings a different song in his career; he is a painter rather than a musician. Adams’ expertise is in landscapes; he paints in oil, his preferred medium.

Brian is easy to chat to. He is wistful about a childhood spent as a war evacuee. He was sent away to Leicester to live with a family as the city of London, faced with bomb raids by the Germans, despatched their children to the countryside for protection. Brian’s first memory of arriving at his foster home was of the family’s chenille draped round table decorated with a large vase of yellow flowers. This attention to colour and detail is reflected in Adams’ landscapes. ‘Padi Green’ (62 x 62 cm) was painted in Bali; the viewer can hear the breeze’s song as it blows through the verdant rice field. Brian and Jasmine travel to Bali frequently; the tranquility and the spirituality of the Javanese environment appeal to Brian. 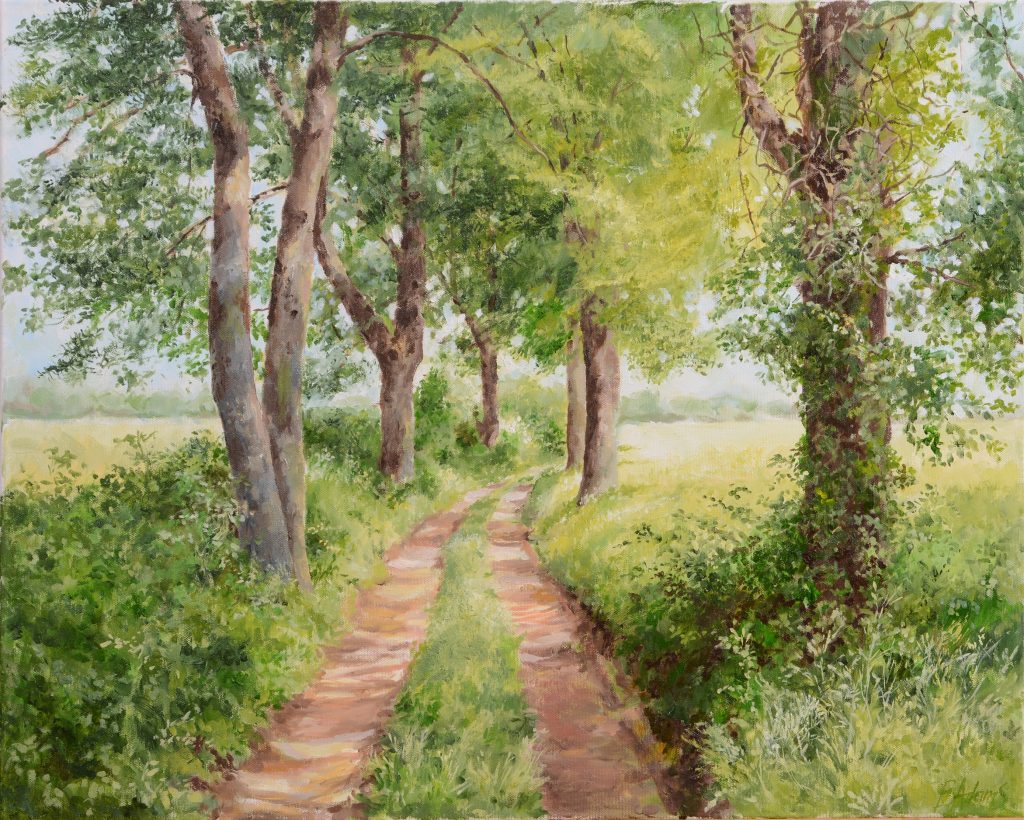 However, it is the English countryside that has impressed Brian the most. He recalls the Watermeads, where his art teacher, Mr Houghton, whom he remembers fondly, brought him to paint. It was Mr Houghton who encouraged and pushed Brian to become the landscape painter he is today. The Watermeads is a luscious Nature Park situated in Mitcham, Surrey; it is a painter’s paradise and post-World War II Britain needed such havens. Some of Brian’s recent paintings are reminiscent of the meads’ surroundings, like ‘The Path’ (61 x 76 cm), although they were painted en plein air in Devon. In this painting, a sandy path curves and disappears into the distance. The path is shaded by trees on both sides. This is a typical English country lane; a typical English idyll. Brian paints with a Western vanishing point perspective. This is due to his art training at the Wimbledon College of Art where he entered as a young student at the age of thirteen on a County Council of Surrey initiative to let younger students enter into art education before the age of sixteen. Brian went on the win the David Murray Scholarship two years in a row which enabled him to be mentored under two Royal Academy resident artists. He completed his art studies at Wimbledon, graduating with a Diploma of Design, specialising in oil paintings and his works were exhibited at the Royal Academy in London. 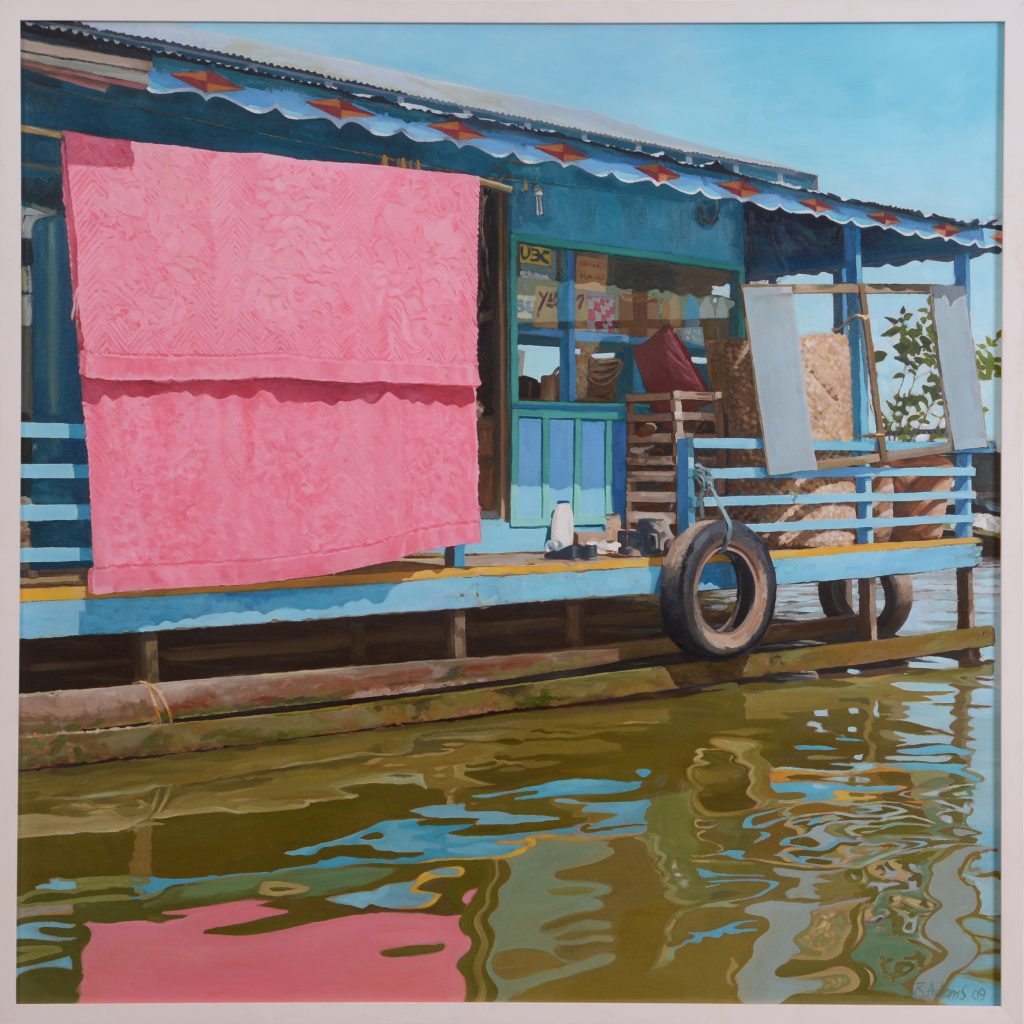 Essentially, it is Nature that Brian extols. He see layers of the colour green in the leaves and blades of grass that he paints. There are shapes undetected by the lay viewer which Brian notices and then translates onto canvas. Take for example, ‘The Pink Blanket’ (dimensions available upon request) in his ‘Reflections on Water’ series, it’s the rectangular blanket in a muted florescent pink that takes centrestage. Our eye moves slowly to the right where we detect the glass window pane of the boat house, its shape echoing that of the pink blanket; further along, but angled slightly forward in the frame, another similar shape captures our attention, is this a discarded wooden window frame? The murky green water reflects these shapes back distorting their visual reality and accuracy; this series highlights Brian’s technical eye for perspectives, his pronounced visual acumen for details detected in light and shadows. This painting is almost Impressionistic but with a touch of Adams’ own visual memory of more than two decades of living in Asia. The ‘Reflections on Water’ series is a visual metaphor for the artist’s remembering of Man and Nature in a fluid symmetry of angular lines; from one perspective, the painting is both realistic and naturalistic, from another, it is abstract and impressionistic. Brian’s ‘Reflections’ series was exhibited at the American Club of Singapore and subsequent at the Singapore International Art Fair in 2012.

Adams is interested in how Man interacts with Nature. He sees in the tree trunks a personal history that has been obviated by centuries of Man’s interruption in the natural environment. Landscapes have their own biographies which the landscape artist must be able to read, he says emphatically. To sculptors, knowledge of the body’s geography – the curves and sinews on the body – is extremely important. Likewise to landscape painters, it is the knowledge of the geography of the land that is most important. It is Adams’ keen observation skills and his ability to compose and translate what he sees onto canvas that makes his paintings memorable. 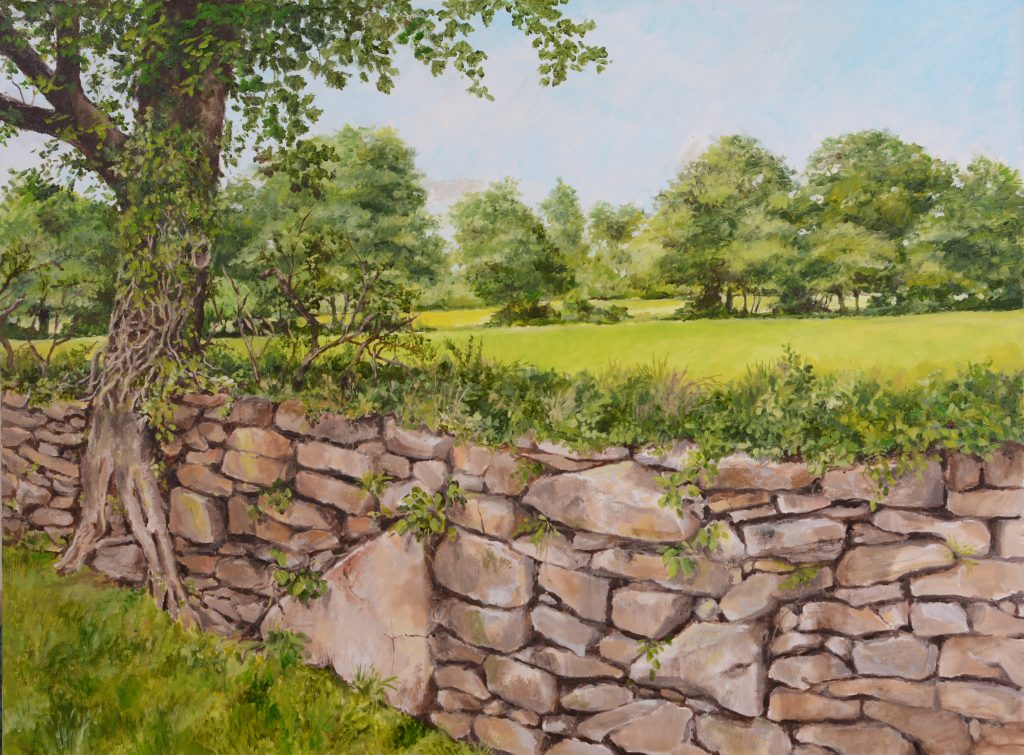 In ‘The Stone Wall’ (76 x 102 cm), we see an ancient wall – man made – and a tree that has found life despite the stone wall; its trunk merges with the wall representing the deep rooted desire of life to find a way. The feeling one gets from this painting is that of tranquility reflected in the tree’s willingness to cohabit and share its home with the stones. The trunk and stone slabs are of similar shades; nuances of browns coexisting with the verdant hues of leaves and grass; the colours blend into one another but the objects do not lose their formal qualities. Reflected here is Man’s interception in a natural environment and Nature’s response to this disturbance: the tree has accepted that Man must always interfere with its home and has found a way to engage purposefully with this interloper.

Adams represents Nature’s relationship with Man in his paintings. His works have been said to resemble photographs. However, they are not to be mistaken with photorealism because Adams’ pieces are not airbrushed to perfection nor are they painted from photographs. In fact, many of Adams’ landscape pieces are rendered in situ; they are captured onto canvas according to what his eye has observed directly; he prefers to reproduce the environment au naturel. His series of shophouses, painted in his adopted home of Singapore captures the flavour of this city state: Man and Nature existing co-independently; although Nature is manicured in Singapore, it still exists in abundance where it must abide by Man’s constant interception. In ‘Blair Brown’ (46 x 36 cm), we see Adams’ eye for detail and his sophisticated understanding of the colour palette expressed in oil which fills the painting with painterly shapes and lines. Here, we notice that Nature lives side by side with Man as if naturally.

Brian Adams is a natural conversationalist. Like the environments he paints, he is a repository of stories. We end our chat with Adams recounting how he was conscripted into the British Army soon after graduating from Wimbledon when all he wanted to do was paint, and how serendipity played a part in him being selected to decorate the army barracks where he utilised the skills he had honed during art school, to paint on walls creating murals rather than on canvases. Adams’ life has been a series of fortuitous and serendipitous events which have led this painter to live a life surrounded by art: painting, sculpting, and architecture. The story of his career in interior designing is one for another time.

Eva Wang Nava is a British Art Historian based in a nation-state not far from the Equator. She holds an M.A. in Art History from The Open University and writes about modern and contemporary Southeast Asian art because she feels that the region she calls home has plenty of good quality art to offer the world. When not writing about art, she writes Flash Fiction, using visual art as prompts to get her writing juices flowing. She also teaches a creative writing course using the examination of artworks as prompts for writing original pieces. Through dialogues with each other and writing exercises, participants explore the different ways of creative writing and experience works of art through a personal, social and cultural lens. Find her work at CarpeArte Journal.