The plot of Chinglish revolves around Cleveland businessman, Mr David Cavanaugh’s (Daniel Jenkins) battered attempts at snagging a contract to build signages for the new Guiyang Cultural Centre. Naturally, Mr Cavanaugh has a few secrets of his own, and so do the Chinese officials, and the delight of the play lies in the many tonal subtleties, coded references, and linguistic nuances that are lost in translation, culminating in a sticky web of political sabotage, corruption and sexual intrigue. 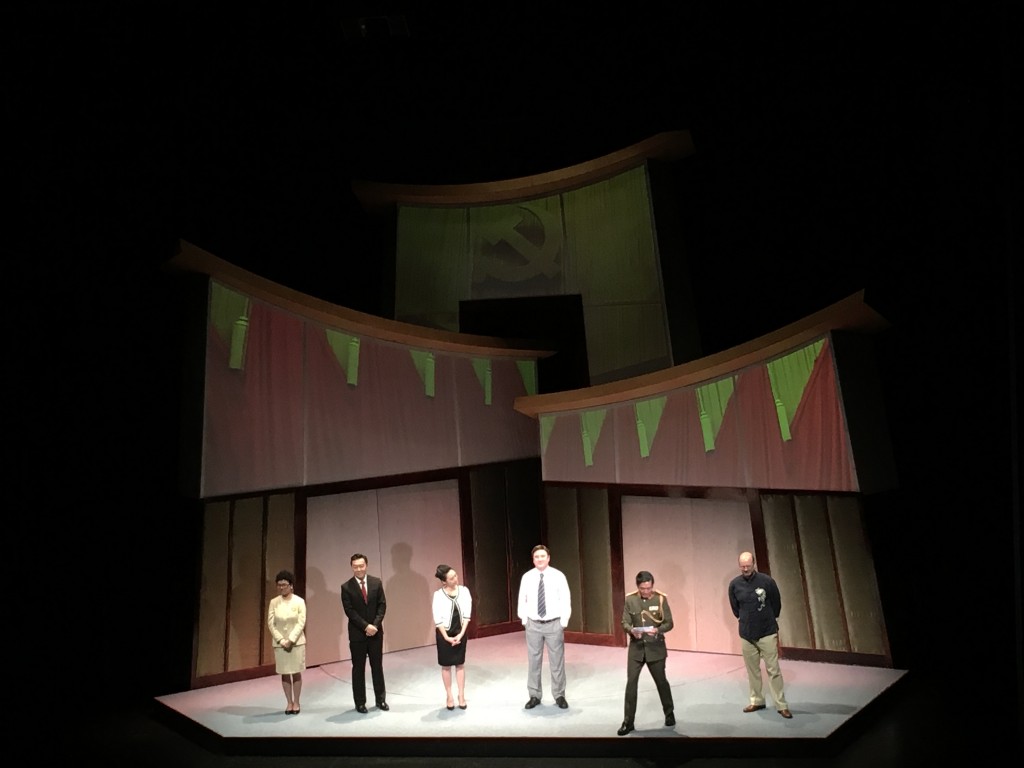 Like its title, David Henry Hwang is interested in exploring the murky grey areas – the inadequacy of language and the difficulty of cross-cultural communication, set against a backdrop of political and moral corruption. Eucien Chia’s terrifically functional circular revolving set, redolent of Chinese communal dining tables, shuttled the audience between private and public worlds from the boardroom meeting to a Chinese restaurant to a hotel room, presaging Vice Minister Xi’s  (Oon Shu An) prescient warning that what goes around comes around.

The poltergeist of screwball comedy, in the many disjointed malapropisms and piecemeal mistranslations that speckle the play, manifests itself primarily in a trio of translators (all played by the very versatile Audrey Luo) blurting out crudities – such as ‘we despite the coastal cities of Shanghai and Beijing’, and ‘he will explain why he spends money so recklessly’. On the other end of comic ridiculousness, an unlikely tryst emerges out of the initially icy and acrimonious meeting between Vice Minister Xi and Mr Cavanaugh. Both of them are hopelessly clueless in understanding the language of the other, yet fluently conversant in the language of sex. As E.E. Cummings would have it, ‘since feeling is first/who pays any attention/to the syntax of things’; the audience did in fact pay a lot of attention and cracked up at the mangled syntax of their conversation. Unfortunately, their heart-to-heart chat in bed about their failed marriages was slightly unconvincing, lacking chemistry and leaving us rather dry.

The framing device that opened and ended Chinglish – Mr Cavanagh’s powerpoint presentation on how to do business in China – felt superfluous, especially when his story told itself and stood on its own two feet, turning his presentation into something of an unnecessary voiceover. At times, Chinglish struggled to find its tone and hopped from character comedy to a sanctimonious lesson at the end. Minister Cai Guoliang’s (Adrian Pang) character lacked depth, existing as a stock Chinese bureaucrat (with the full naggy wife, bad phone reception and poor sense of geography arsenal), but who later inexplicably acquires a sudden sense of nobility when slapped with corruption charges. In contrast, Vice Minister Xi Yan seemed to be the most complex character, with her ‘use at your own risk’ revelations, afternoon delights with Mr Cavanaugh and her trapped marriage, but this inner drama was only glimpsed at briefly by Oon. Guo Liang, as Judge Xu Geming, had limited stage presence but emanated gravitas and coupled well with Audrey Luo, whereas Matt Grey played Peter Timms, the British ‘consultant’, confidently and to great comic effect.

There are brilliant moments of absurdity (particularly the scene where Mr Cavanaugh’s affiliation with the Enron scandal is perceived to be highly meritorious by Judge Xu) but a lot of the jokes did feel like a long Buzzfeed listicle (Top 25 Hilarious Bad Translations!) adapted to stage.  Chinglish is massively funny and of excellent production value but I think unfortunately let down by Hwang’s script, which, at its core, lacked heart.