In celebration of their theme for 2012, Hermès is delighted to welcome visitors to the historic Tanjong Pagar Railway Station for the opening of “The Gift of Time” in Singapore.

In celebration of their theme for 2012, Hermès is delighted to welcome visitors to the historic Tanjong Pagar Railway Station for the opening of "The Gift of Time" in Singapore.

A section of the iconic railway station has been converted into a dreamlike space embellished by time and movement. Visitors are invited to travel into the heart and emotion of Hermès time. In the course of a circular walk-through display representing time, American artist Hilton McConnico, scenographer, poet and long-time partner of Hermès, tells the story of Hermès time through poetic displays tinged with light humour, a cornucopia of colours and a series of sensory discoveries.

"Hermès time does not try to master time but rather offers us the time to see and understand this ever changing world", says Hilton McConnico.

It is with bated breath as I enter the exhibition space to begin my journey through time. Our group is ushered into the low-lit first chamber, in the hush, we begin by contemplating the Origin of Time: A sundial sits on the wall between 2 mounted horses’ heads and bridles paying homage to Hermès’ equestrian roots. 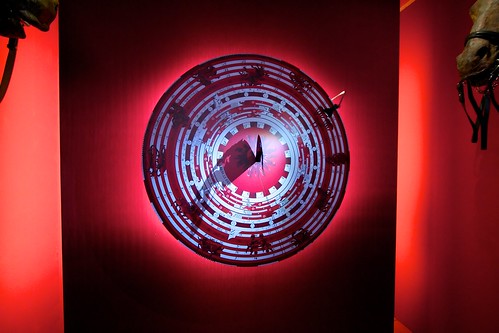 We then proceed to Free Time where we are each presented with a lovely Hermès pouch and asked to deposit our watches and mobile phones in it because in order to fully experience free time, one must first be released from the grip of time. Whimsical statements in English, French and Chinese encourage the viewer to savour each and every moment. I am particularly inspired to stick raspberries on the tips of my fingers and enjoy them one by one. Deliciously child-like and carefree! 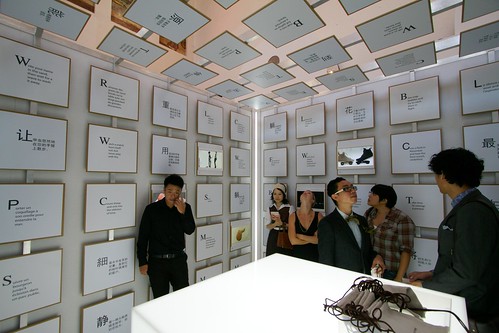 Next, we have Time Suspended, in reverence to the watch. Have you often dreamt of putting time on hold, if only to steal a few minutes of blissful peace and quiet? Hermès’ Arceau Time Suspended puts the control of the clock at your fingertips. Stop the watch with a push of a button while you escape in a good book or sleep the afternoon away and when you’re ready to enter back into reality, simply push the button again. The watch is completely gorgeous too!

The fascinating journey continues into the next room that exudes an Alice in Wonderland-like charm. In Time Balance, a huge top spins and dances, twirling like a ballerina. Exquisite Hermès flatware and crystal ware appear to sit precariously within this surreal installation. Taking centre stage is the innovative Les Inversables, an unspillable port service for ten glasses patented by Hermès. The service can be tipped in any direction – the glasses remain upright. 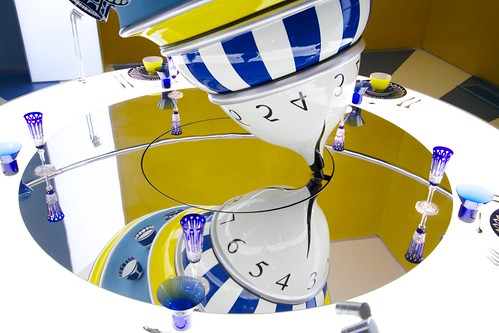 Still bathed in wonderment, we enter The Stroke of Time and fall under the gaze of an enormous cat. When Hilton McConnico asked Creative Artistic Director Pierre-Alexis Dumas what Hermès time would be if it were an animal, Dumas said it would be a cat as a cat is that perfect embodiment of both quickness and stillness. In the same room, two Hermès bags; one new, one from the Hermès Conservatory, sit side by side with a swinging pendulum between them signifying the creation of a fine patina over the passage of time. 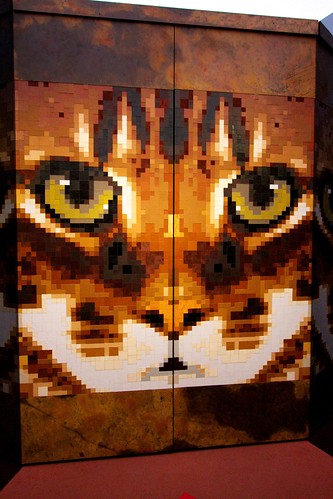 As we push through the doors to the next room, Imaginary Time, we are invited to sit down and let our imaginations wonder in a trippy, hypnotic space as we stare at the evolving colours on the ceiling.

The Gift of Time gives as the fable of the Tortoise and the Hare and the philosophical statement “Beneath the branches of an ageless tree, after thousands of years of deep thought, Time concluded that there was no end.” And then we come full circle as we exit where we started. 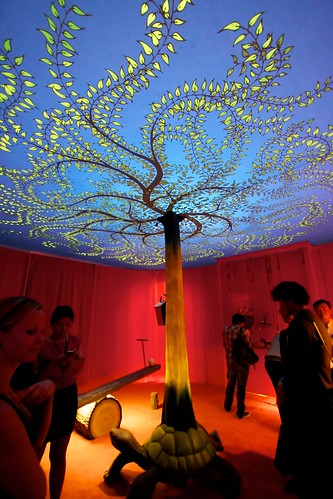 A spectacular spectacle, Hermès has done it yet again and in such an apt location as we are transported on a sensory ride through the luxury world of Hermès.

This exhibition made its debut in Hong Kong and will continue after Singapore in Lille, France.

The Gift of Time runs from 1st to 12th August 2012 at the Tanjong Pagar Railway Station.

Editor’s note: More photos of "The Gift of Time" available at our Flickr album. Words by Geraldine Lee, photos taken by Eric Lim