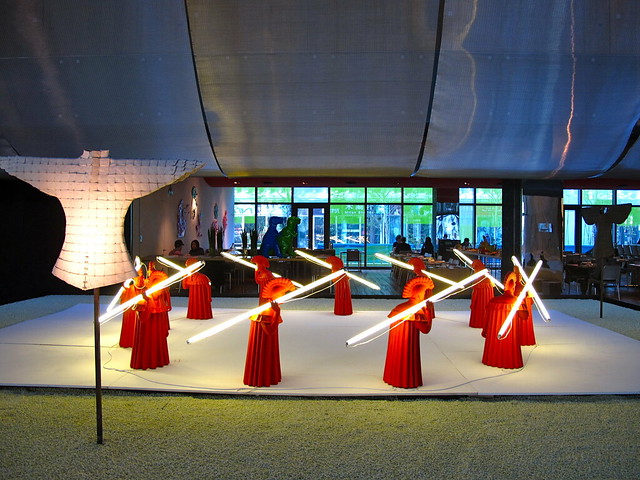 RedBox Studio in partnership with ALEXANDER OCHS GALLERIES BERLIN│BEIJING and in collaboration with The Opposite House Beijing showcases an installation of figure sculptures by Wang Shugang at the atrium of The Opposite House.

Wang is an accomplished Beijing-based artist who returned to China in 2000 after developing his career for over a decade in Germany.

As a graduate of the prestigious Central Academy of Fine Arts in Beijing, Wang demonstrates an exceptional command of the traditional medium in his sculptures, combining the figuration of 20th century Realism with Buddhist iconography and scenes of daily life in China. His signature motif is to present groups of anonymous figures that comment on the essential relationship of the individual to his the society around him. This motif is expressed through such seemingly ordinary actions as the monk sweeping the floor, the meditating lama or the standing Qi Gong layman and the squatting bald man. The conflict between tradition and modernity and the palpable loss of history and culture in the midst of rapid urbanization and artificial mass production often result in themes of nostalgia and reflection for Wang and his contemporaries. His figurative work, strengthened when viewed en masse, displays a rich expression of the sense of community and—when displayed in an urban landscape—provides a playful reflection on the quiet moments of daily life in China. 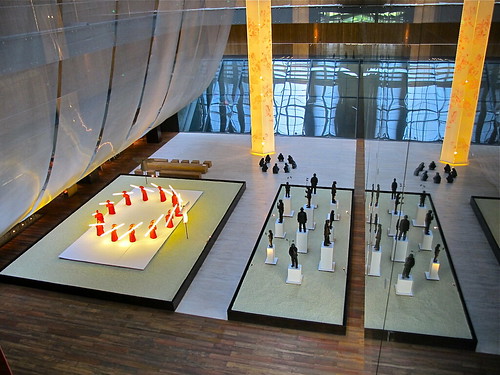 “Wang Shugang is one of the few contemporary Chinese sculptors who successfully capture an expression of the everyday in China with a playful approach to the mundane,” says Katherine Don, Director, RedBox Studio, “and his works extend past the art world to encompass living Chinese history.”

In 2008, The Opposite House began its collaboration with contemporary Chinese art galleries in Beijing, showcasing the works of up and coming young artists as well as established pioneers of the contemporary Chinese art scene. The six-storey high atrium exhibition space serves as a platform to share and increase interaction between people and art. 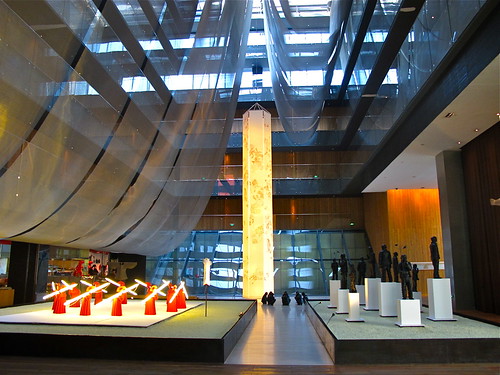 “These stout bronze figures give our space a different dynamic, adding a cheeky element with the placement of old Beijing characters in our sleek contemporary space, in a way representative of how post-Olympics Beijing has evolved,” says Anthony Ross, General Manager.

Wang Shugang (b. 1960) currently lives and works in Beijing. His works have been widely exhibited between China, America and Europe and are publicly displayed in China, Germany and Canada.