Animal traps from around the world , clusters of coral, rubber seeds, ultrasound images….you would expect to find these in a science museum but Singapore Art Museum’s (SAM), newest exhibition UNEARTHED combines both science and art in a showcase of artworks that aim to investigate and discuss our relationship with nature.

Animal traps from around the world , clusters of coral, rubber seeds, ultrasound images….you would expect to find these in a science museum but Singapore Art Museum’s (SAM), newest exhibition UNEARTHED combines both science and art in a showcase of artworks that aim to investigate and discuss our relationship with nature. The exhibition, which is a collaboration between SAM and the Earth Observatory of Singapore (EOS), hosts 28 works from the museum’s permanent collection, artist and private collections as well as seven specially commissioned works. The museum’s first exhibition of the year also reveals its orientation and outlook under its new director Dr. Susie Lingham. According to the press release, the museum will look to present programs and projects that explore interactions between artists and various disciplines and modalities in its future exhibitions.

So what does the exhibition unearth? Physically of course, it is the piece of prime land that installation artist Twardzik Ching Chor Leng has dug out from the front lawn of SAM and placed in a sealed glass container inside the main building (Real Estate, 2014). 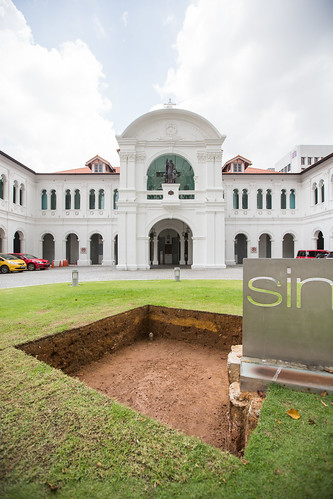 Conceptually, the work asks us to think about land, which is a scarce and highly valued resource in Singapore, beyond its material value and to consider its real worth in terms of its physical attributes of colour, texture and substance. The work perhaps also asks us to dig deep and see what lies at the foundation of the city state, beyond the rapidly urbanized and fast paced global city that Singapore has become. Lucy Davis unearths the history that lies within two captured animals that were part of the Raffles Museum collection and are now in the process of being re-conserved. 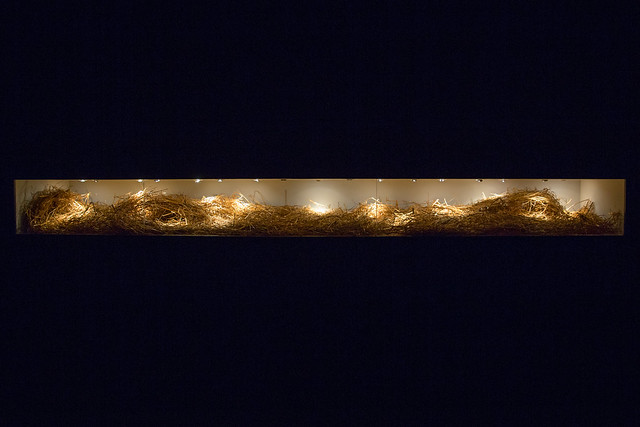 Mixed media installation Nanyang Meadows, ‘shows’ a crocodile – only through the references of a long glass case (which is the length of the actual crocodile) filled with straw stuffing that was found inside the crocodile, a papier mache tongue and a glass eye that were used in the place of the original to conserve the animal. The stuffing inside the crocodile is thought to be imported (DNA tests on the straw are being conducted) and Davis’ display of the foreign material is a reference to the colonising of the indigenous to make it comfortable and familiar. The work’s title too, which refers to a location in the Nanyang Technological University campus area, alludes to the awkwardness of foreign imports like the use of pastoral terms like meadow, green and grove to names places and areas in the colonies. 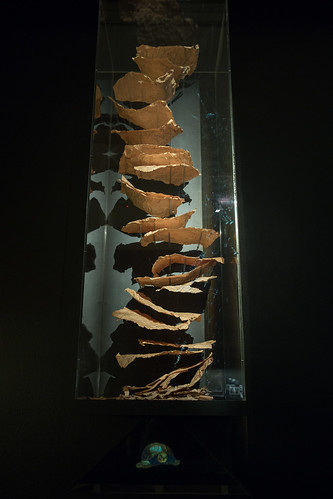 Image: Lucy Davis, All The Way Down, 2014, Mixed media installation

Davis’ second work, titled All the Way Down is also a mixed media installation consisting of a hologram of a tortoise (which was captured in Singapore in the early 20th century) and suspended newspaper sheets that were uncovered within the internal cavity of the preserved tortoise when it was re-opened recently. The aged sheets of newspaper carry stories of daily life from the period when it was preserved and capture the political and social issues of the time which make for interesting reading and reflection. 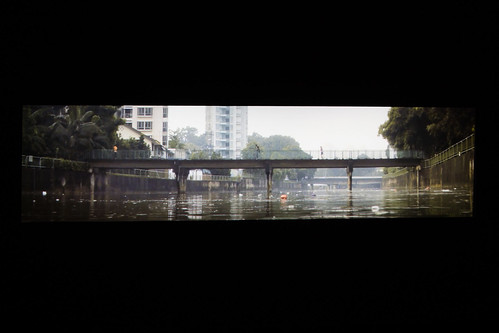 Though Singapore is surrounded by the sea, rapid urbanization has hidden water from our sight. Charles Lim with his 21 minute video titled All Lines Flow Out (2011), takes us on a journey through Singapore’s hidden waterways that are spread throughout the city to discover the microcosms that exist therein. Lim, who is a professional sailor, travels through Singapore’s open drains and storm canals and shows us schools of fish, thriving plant and animal life and the men in plastic coats who maintain these subterranean and cavernous places within urbanized Singapore. 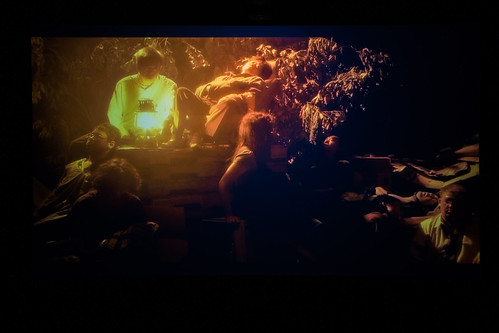 Also in the exhibition is Ho Tzu Nyen’s celebrated 41 minute film, EARTH (2009), which was first commissioned as part of the Singapore Arts Festival in 2009 and was also shown at the Venice International Film Festival the same year. It depicts a post apocalyptic scene where a heap of bodies slowly come to life as the characters languorously awaken and then return to their slumber. Many of the scenes are drawn from the historical works of classical artists like Caravaggio (Medusa), Gericault (The Raft of Medusa) and Delacroix (The Massacre at Chios). The film mimics the human experience of examining a historical artwork. The camera moves across the scene zooming in and out as the human eye would when looking at a historical painting to capture first the whole image and then examine the details in pieces. Ho’s work has been shown in many cities around the world and while the visuals remain the same, the soundtrack has often been tailored to fit the location. Renowned musicians like the English rock band Mugstar (Liverpool 2013), Aki Onda and Nils Frahm (Switzerland 2012) and Oren Ambarchi (Sydney 2011) have collaborated with Ho to produce the music for the film on different occasions. When first shown in Singapore in 2009, the soundtrack was produced by a local band The Observatory but in this screening at SAM the accompanying track is by the Hamburg-based Black to Comm who played live to a screening of EARTH in Berlin in 2010 and subsequently released the music as an album. 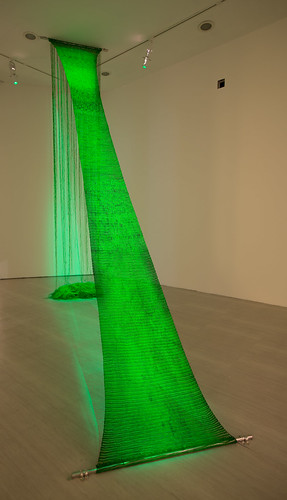 Jennifer Ng’s eye catching work alludes to nature through its metaphorical title and form. Ng, an educationist and an emerging artist created her work as a result of discussions with other teachers and students into the learning process of young people. Her discussions revealed that these learners became result oriented and in the process often lost opportunities to learn holistically and grow. . Her vibrant green artwork is made up of crocheted elastic string and is called Pulling At Grass To Make It Grow. Depicting the Chinese proverb literally, she shows us that the result of such pulling will yield a weak and worn out harvest. Stretching young people by way of demands on their time and in terms of expectations may result in a wearing down in terms of spirit, stability and energy and that the pulling won’t help them grow faster; instead it’ll just weaken the roots and pull them out of the ground. 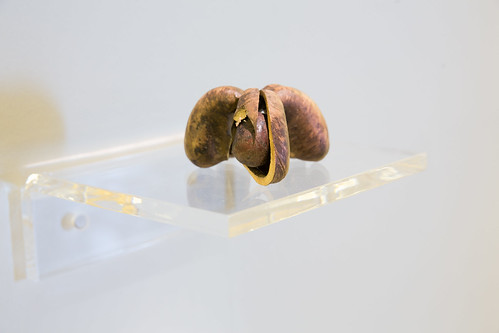 Along a similar theme, is Isabelle Desjeux’s 1000 Rubber Seeds And One Mutant. Displayed on shelves are open rubber seed pods which have fallen from the tree and exploded in order to spread their seeds as far as possible, but in the center is a closed pod which failed to open. For scientists such failures or mutants are important as they help them in understanding processes and organisms. Desjeux’s work draws an analogy with our society whose pursuit of perfection often leads to a low tolerance for imperfections or failure but she reminds us that it is these mutants who will often open up new ways of looking and understanding in the world.

UNEARTHED runs at the Singapore Art Museum till July 6 2014.