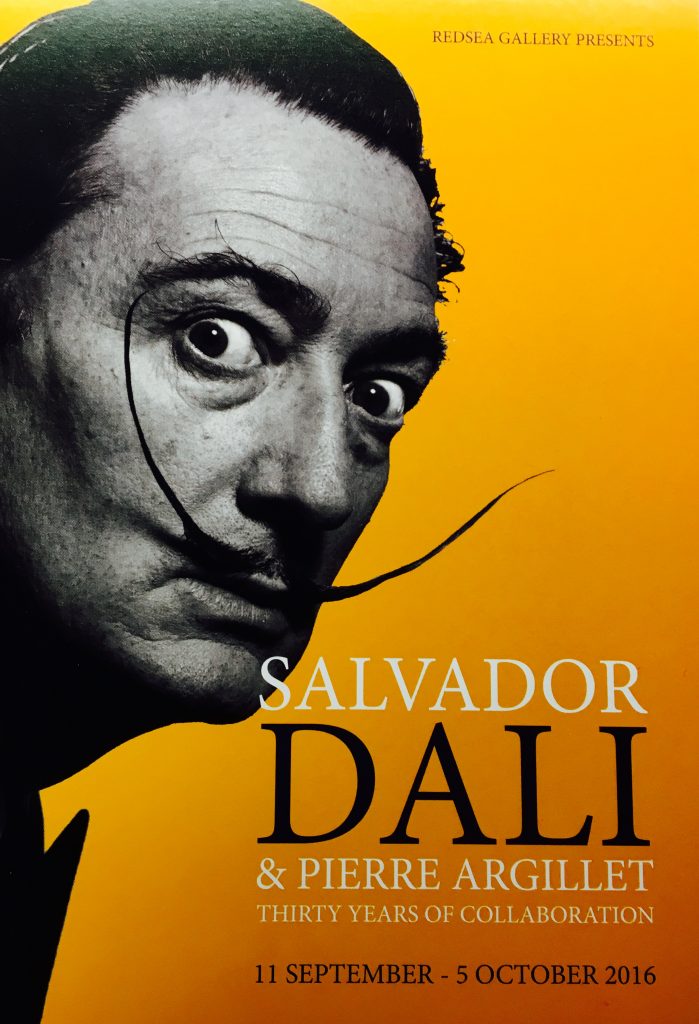 Pierre Argillet was a publisher, art collector, friend and confidant of Salvador Dalí. For over 30 years they worked together on a series of almost 200 etchings – among other projects – some of which are now available for viewing and acquisition in Singapore.
Tweet

The exhibition is enriched by the stories that Christine Argillet has to share. The daughter of Pierre Argillet spent her teenage summers in Dalí’s house in Spain. For each of the works in the collection, she has a interesting story to tell. The public will have the chance to hear some of these stories on Sunday when the REDSEA Gallery is organizing a Q&A with the French collector, an event not to be missed.

One of the highlights of the collection is the Picasso-Dali series of etchings. The series has in total eight etchings, and seven of them were brought to Singapore. Dali wanted to work with Picasso on a new set of prints, but unfortunately, the reunion never happened. Then, Dalí had an idea to solve the situation. He asked Argillet to buy a few etchings from Picasso. After that, Dalí discussed with his printmaker a way to transfer Picasso’s work to a plate so Dalí could rework and Dalinize Picasso’s work.

The works portray the famous Spanish bullfighting and Dalí’s surrealist interpretation of what he considered a barbaric event, on top of Picasso’s work. For instance, in one of the pieces, an armature that resembles a rhinoceros protects the bull, and the crowd is portrayed as vultures. The Surrealist master tries to invert the roles and invite the viewer to put himself in the place of the bull. In another etching, Dalí puts the bullfighting taking place while it snows;something that would never actually occur in Spain. In this print, if the viewer places her/himself approximately 3 meters far from the work, squinting the eyes, it is possible to see the face of a Torero forming in the picture. Optical illusions and perception tricks are characteristics of Dalí’s works. The artist traditionally also depicts himself in the works, sometimes in a clearly recognizable way, at times more subtle. This series is one of Christine Argillet’s favorite since it shows clear influences from famous Spanish modern artists when it reveals Goya’s influence on Picasso, and Dalí’s admiration for Picasso. This particular series of etchings was only made public after Picasso’s death. 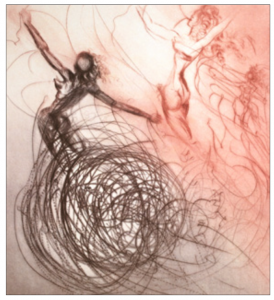 Women in the Waves, 1969, image courtesy of REDSEA Gallery.

Christine also shared that Dalí worked very fast and used to be engaged in multiple projects at the same time. In an exclusive preview organized by the REDSEA Gallery, she shared one of many anecdotes that she experienced while growing up. Her father, Pierre Argillet, impressed by the way Salvador Dalí creates his etchings had the idea to have the artist etching live in a press conference. Reluctant at first, the artist ended up agreeing to do so. On the day, in Paris, with more than 100 members of the press present, Dalí arrived to make the etching. When he entered the room, Argillet’s noticed that something was amiss, and Dalí’s eyes looked vitrified and wide open, more than usual. The artist did a few circular inscriptions in the copper plate and left triumphant, saying it was done. Horrified, Argillet went after him and asked him to come back to finish the work. Dalí refused and left the premises, leaving Argillet in a very delicate situation.

A few days later Dalí called Argillet and asked him to meet in his hotel, and bring the plate. Christine, a young teenager at that time, went with her father. When they arrived, Dalí asked how was the etching and Argillet replied that there was nothing good on it. Incredulous, Dalí requested to see it and ashamed confirmed what his friend was saying. Embarrassed he explained to Argillet that, after talking to Timothy Leary on the night before the press conference, he decided to try LSD, hoping it would enhance his skills for the big day. Dalí then promised Argillet he would make a beautiful etching on top of the ‘LSD’ circles. The result is shown in the exhibition. Curiously, for a creative artist of the caliber of Dalí – who had never experienced any drugs, he didn’t smoke or even drink – it became clear that he didn’t need any artificial psychedelic strategies to be creative. 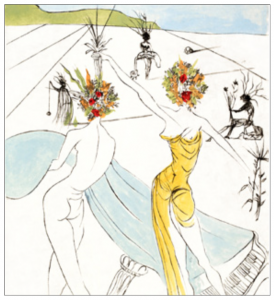 Flower Woman at the Piano, 1969, image courtesy of REDSEA Gallery.

In the series entitled Hippies, Dalí draws his own interpretation of the free spirit movement that was growing during the 60s. Inspired by Argillet’s photographs taken on a trip to India, the artist saw clear connections between the Hindu culture and the Western movement and decided to add elements of both when portraying his interpretation of the hippies. Compared to the intricate traces of his early etchings, the lines in this series are more spontaneous and free, in agreement with the theme.

Accompanying the etchings there are tapestry and porcelains made in collaboration with the finest artisans of France. The Aubusson Tapestry named Argus and based on the homonym etching by Dalí, was created through a process recognized by UNESCO as a World Heritage, in 2009. The traditional Aubusson weavers work to keep alive a century-old technique. The tapestry in the exhibition took two years to weave, and it belongs to a series specially conceived for museums. Its high level of detail, when compared to the etching is impressive. Dalí and Argillet oversaw the weaving process, which was all hand made. They wanted to ensure that the colors and the details of the original etching were well transposed to the tapestry. 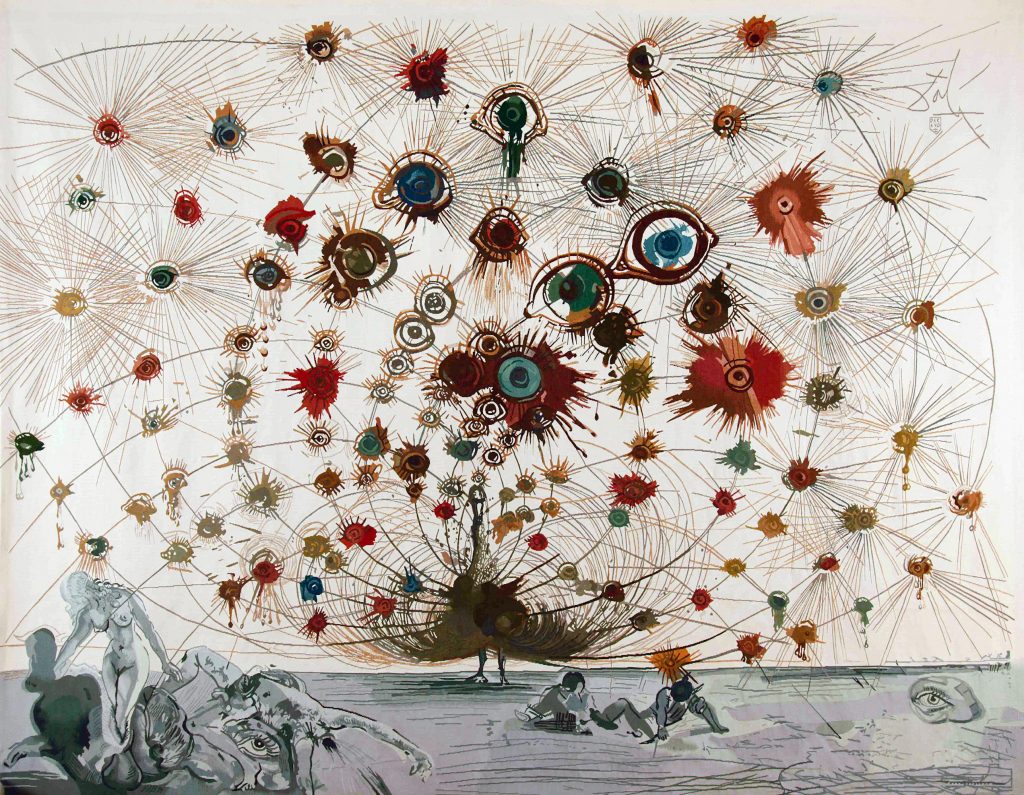 The porcelains available in the collection are a limited edition, created in 1973. Six of Dalí’s etchings were chosen by Argillet and the artist to be transposed to plates by Raynaud – the famous French porcelain maker of Limoges – whose traditional signature is the use of a dark blue and gold leaf patterns in his pieces. These works portray Dalí’s love for craft since he was always collaborating with traditional artisans to explore his masterpieces using different techniques and mediums. 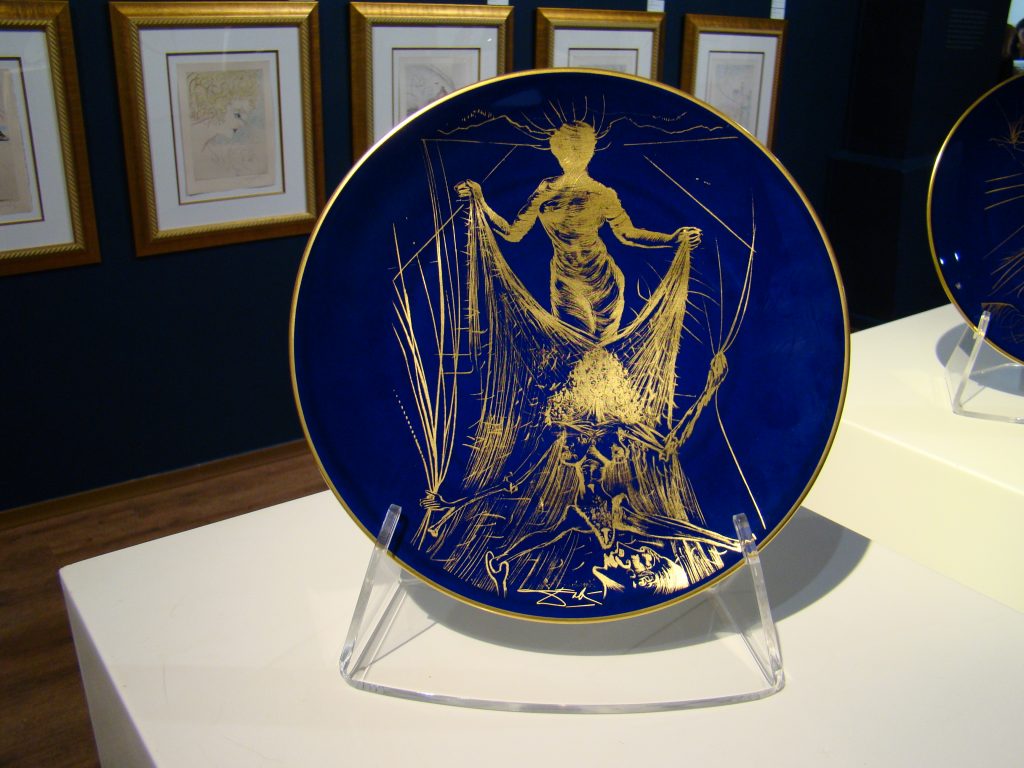 In the exhibition, the public will have the rare opportunity to see two original copper plates created by Dalí and used to print the etchings. The pieces help the public to understand how the technique works and once more enhances the fine-tuning between fine art and craft through the collaboration of the artist and his printmaker.

The collaboration between Argillet and Dalí on the etchings ended when the artist, already 69 years old, could not bear to do them anymore since the reflections of the copper plate hurt his eyes. The friendship remained, and they worked together sporadically in other projects.

Events related to the Exhibition: