Iranian Artist Morteza Zahedi channels his life experiences into his art. While contemporary Iranian pop culture has played a significant role in the evolution of Zahedi’s oeuvre, his family remains a constant source of inspiration and throughout my interview with the lively artist, he peppers our conversation with anecdotes derived from exchanges with his close-knit family.

As a prolific children’s book illustrator, Zahedi is fascinated by the way they relate to the world around them. He narrates how he came across a young cousin of his busily doodling on a piece of paper. However she was not looking at her work but had her ear positioned next to where she was drawing intently. Curious, Zahedi asked what she was listening to. To which she answered that she was making a picture of herself eating rice: She was translating the sound of her chewing into a visual medium – A literal and unfettered interpretation.

This child-like wonder is evident in the playfulness exuded by Zahedi’s works of art now showing at XVA Gallery in Dubai. ‘Tickle’ features the artist’s large-scale carpets, woollen sculptures, and most recent works on paper. He describes the influence of Outsider Art that looks beyond the established art traditions and rejects mainstream art values. Art is produced through pure and authentic creative impulses; very much like how a child creates. Zahedi’s abstracted forms are on display in his series of works on paper, “Thundering Horses”. Zahedi fills the entire surface with his manga-like horses; his sophisticated use of negative space produces pleasing compositions that appear to jump off the page. His fantastical beasts, with their elongated forms and brightly coloured miens, are bursting with life and moment despite their relatively small dimensions. Zahedi also deliberately worked with simple gel ink pens in a limited colour range. As he explains, outsider artists were not interested in the materials they used, they dismissed premeditated ideas of what art should be and what it should represent. Rather, they simply had an urge to communicate; to externalise imagination, emotions and responses. 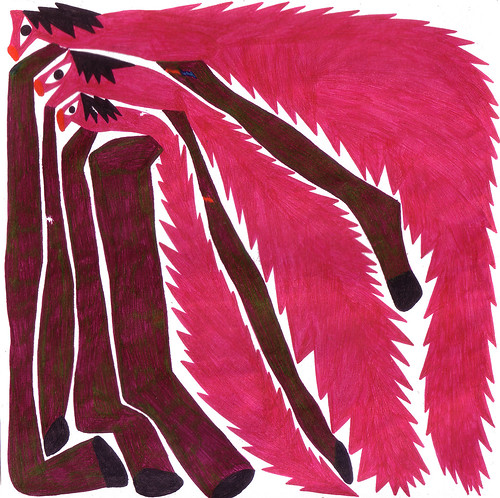 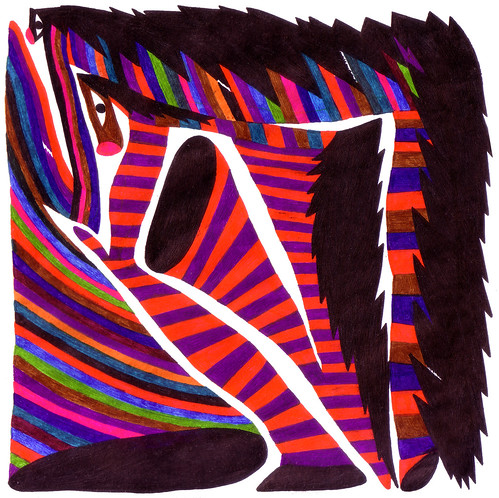 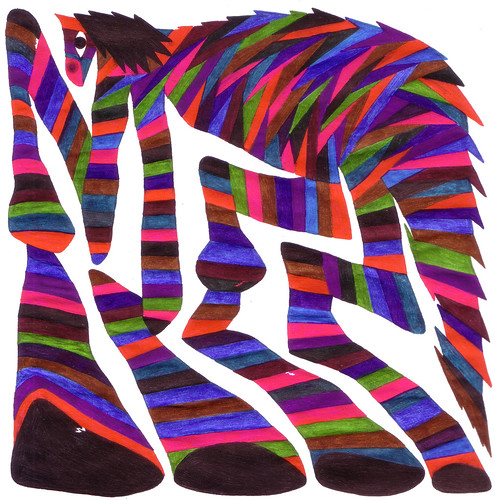 Persian carpets are one of the most ubiquitous manifestations of Persian art and horses are part of the fabric of Persian history. Zahedi has fused these two Persian icons together to create three large carpets that adorn the walls of the gallery. These grew out of an unsuccessful carpet shopping trip he made with his wife, who then suggested why not use one of his many pictures as a template design for a carpet. Zahedi’s quirky horses deliver a fresh twist to an ancient and traditional art form. 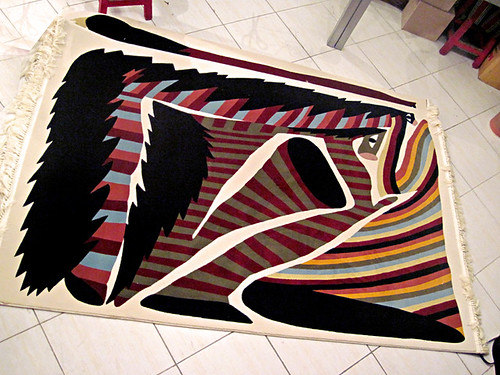 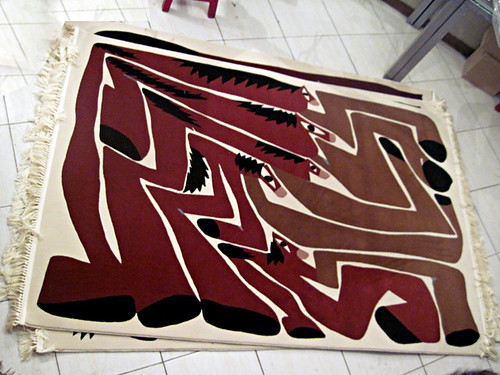 Also on display are kooky, knitted wool sculptures. Zahedi in collaboration with his student, Nahid Behboodian, has created three dimensional renderings of imaginary characters from some of his works on paper. When asked why these in particular, Zahedi replies that they were the ones Behboodian felt were the easiest to craft into knitted forms. 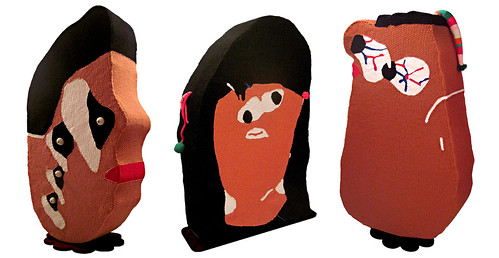 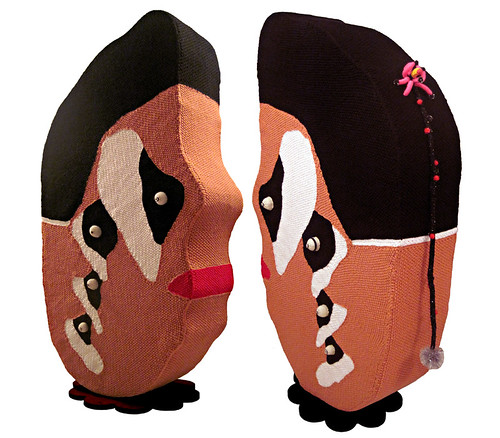 Zahedi considers the various mediums he works in to be explorations, leaving pieces untitled so that the viewer can invent their own stories and weave their personal narratives around them. Zahedi’s art appeals through its spontaneous and uninhibited nature as we are given a glimpse into the fantastical world of his imagination. For Zahedi, art is not high-brow or elitist. What he wants is to tickle your fancy and make you happy.

Morteza Zahedi: Tickle will run until 7 December 2013 at XVA Gallery in the Al Fahidi Historical Neighborhood.

About the Artist:
Morteza Zahedi was born in 1978, in Rasht, Iran and today lives in Tehran. He graduated from the Art and Architecture College, Tehran in 2001 with a B.A. in Painting. He previously exhibited with XVA Gallery in 2012 and has been part of numerous international group shows, most notably in Japan.

About the XVA Gallery:
Established in 2003, XVA is one of the leading galleries in the Middle East that specializes in contemporary art from the Arab world, Iran and the Subcontinent. Exhibitions focus on works by the regions foremost artists as well as those emerging onto the scene. The gallery’s artists express their different cultural identities and perspectives while challenging the viewer to drop prejudices and borders. XVA Gallery exhibits both locally and internationally; collaborating with galleries and participating in international art fairs, such as Art London, SH Contemporary and Art Basel Hong Kong in order to further expose Middle Eastern contemporary art.

XVA Gallery and XVA Art Hotel are located in Dubai’s heritage district, now called Al Fahidi Historical Neighborhood. XVA founded and organized the Bastakiya Art Fair from 2007- 2010 as part of its commitment to raising the profile of contemporary art practice in Dubai. The XVA Art Hotel serves as an annex gallery for curated exhibitions and participates in the Sikka Art Fair.

Opening hours:
7 days a week: 10am – 6pm.
And by appointment outside of working hours.