From brooding monochromatic portraits to a kaleidoscopic collage of works inspired by the children that he taught art to. Syrian artist, Mouteea Murad have rose out of the darkness and into the light. Geraldine Lee met the artist in person at Ayyam Gallery in Dubai and listened to his inspiring story behind each work.

A Date with Spring now showing at Ayyam Gallery is an exhibition of new paintings by Mouteea Murad, a Syrian artist who lives and works in Cairo. Murad’s acrylic paintings are composed of bold bands of colour, the vibrant colour schemes evoking frenetic energy or a sense of calmness depending on the palette used for each individual work. Murad’s oeuvre masterfully blends contemporary abstraction with Islamic art traditions.

We sat down with Mouteea Murad and through gallery director, Myriam Jakiche who kindly translated, engaged in conversation about his art practice.

The evolution of Murad as an artist has not taken a straight trajectory. Prior to 2007, before he took part in Ayyam Gallery’s Shabab competition, his works were brooding monochromatic portraits seething with torment. His final submission however was a kaleidoscopic collage of works inspired by the children that he taught art to. Teaching, says Murad, taught him a lot and it brought him joy. And thus began his transition as he rose out of the darkness and into the light.

As an exhibition title, A Date with Spring is loaded with meaning. It appears an obvious reference to the Arab Spring and yet is quite the opposite as Murad desires to bring hope to contradict the prevailing confusion and as a juxtaposition to the associated violence; a positive force to repudiate the negative. The individual titles are imbued with optimism and happiness, ‘Trial No.92; A Date with Spring’ (2013), is suffused with a bracing green; Murad’s lines depicting a blossoming Spring landscape. And ‘Trial No. 88; Love in the Light of the Desert’ (2013) melds the colour of love; red, with dusky, sandy tones that imbue the work with romantic allure. 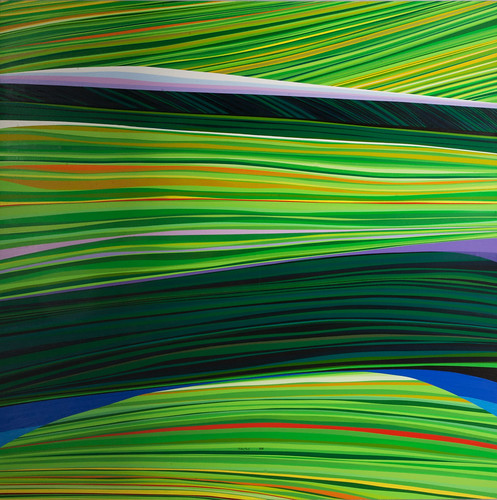 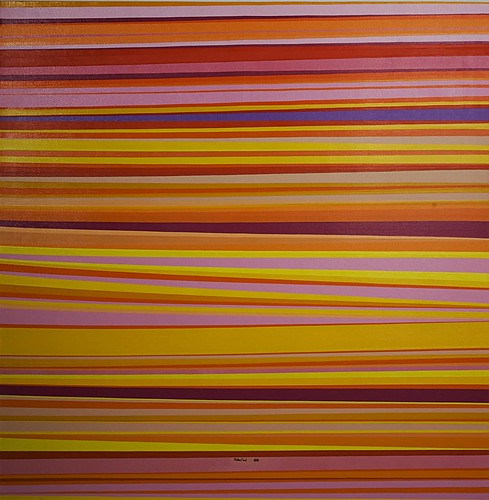 As an artist, Murad’s triggers are his interactions with his environment, including exchanges with his family and his friends. Inspiration can strike while he is praying or listening to music, as in ‘Trial No. 86; Vision in the Blue Dream’ (2013): A composition of sound made visual. This is also the only work where Murad has imprinted two signatures so that it can be displayed with its lines viewed horizontally as well as vertically. 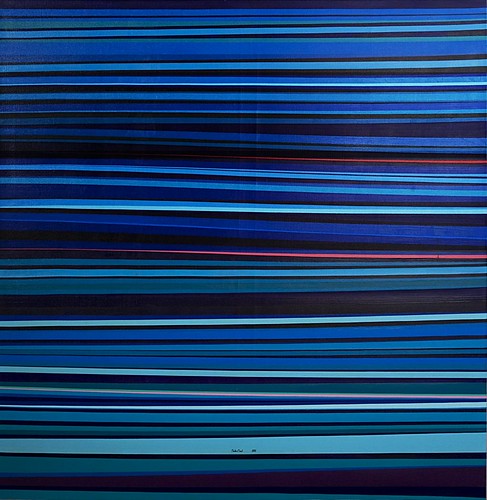 Murad credits his faith as having guided him in his art practice. He prays every day and is grateful to God for blessing him with the energy to continue to work. And it is this spirituality that drives him to dedicate this collection in the service of others because while he still carries the angst of being part of a Syrian diaspora and intensely bears the pain of seeing his homeland in disarray, Murad believes art should not be a reaction to what he feels inside but a medium to channel a message of positivity. Murad is effectively seeking to communicate that there is still beauty in this world.

Speaking on how his work has evolved, Murad explained that while in Syria, his pieces involved technical algebraic calculations but the effect of his relocation to Cairo rendered him incapable of working in the same vein. The turmoil within him stemming from this displacement translated into more spontaneous works. This state of flux is manifested in his ‘Trials’, which he views as a series of explorations in symmetricity.

Murad’s search for balance and harmony extends through to his use of horizontal lines of colour for the bulk of this new collection as they are more aesthetically pleasing to the human eye, but as he continues to experiment, his latest piece “Trial No. 96; Eastern Lines” (2013) features indentations that criss-cross the work diagonally. 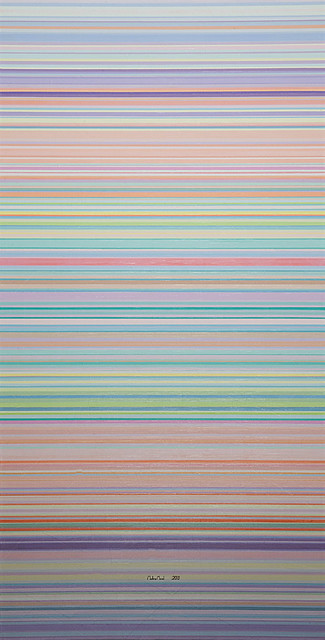 Hence lays the mark of a true artist, one who refuses to rest on his laurels, whose artistic point of view lies not in the static but in constant fluidity and challenge.

Mouteea Murad: A Date with Spring runs till 12 December 2013 at Ayyam Gallery (Dubai).

About Ayyam Gallery
Founded by collectors and cousins Khaled and Hisham Samawi in Damascus in 2006, Ayyam Gallery sought to nurture Syria’s burgeoning and dynamic contemporary art scene through landmark non-profit initiatives such as the Shabab Ayyam Project, an incubator for emerging artists. Expansion into Beirut and Dubai enabled Ayyam Gallery to broaden its scope from the promotion of work by Syrian artists to those from the wider Middle East region. In doing so, Ayyam Gallery has established itself as one of the foremost exponents of Middle Eastern contemporary art to the international community.

Today, Ayyam Gallery is recognised as a leading cultural voice in the region, representing a roster of Arab and Iranian artists with an international profile and museum presence. A number of non-commercial exhibitions, as well as the launch of Ayyam Publishing, Ayyam Editions, and The Young Collectors Auction, have further succeeded in showcasing the work of Middle Eastern artists with the aim of educating a wider audience about the art of this significant region. Ayyam Gallery Damascus currently functions as a studio and creative haven for artists who remain in the war-torn city. In early 2013, Ayyam Gallery launched new spaces in London and Jeddah.