48 works of Picasso’s, shown for the first time in Asia, include lithographs, linocuts and rare corresponding plates in a specially curated exhibition at STPI Gallery, SIngapore, till 24th August 2013.

Recognised as one of the pioneers of Cubism, most people may be more familiar with Picasso’s paintings. His influence however extends beyond that and a new specially curated exhibition at STPI Gallery, The Mystery of Picasso’s Creative Process: The Art of Print Making aims to showcase Picasso’s expertise in the print medium.

48 works, shown for the first time in Asia, include lithographs, linocuts and rare corresponding plates. Through every stage, until the final work, the visitor follows Picasso’s creative process and evolving artistic vision.

Picasso’s voracious appetite for creation combined with his unquenchable curiosity led him to try his hand at different mediums. According to Tatyana Franck, Curator of the archives of Claude Picasso, “Printmaking became the battleground of his creativity. In many ways, printmaking was challenging for Picasso: It was physical compared to painting or drawing. In addition, it allowed possible adjustments whereas other mediums did not.”

The exhibition focuses on specific themes, demonstrating how Picasso’s imagery went through a relentless process of metamorphosis. Starting with The Bull, which Picasso commenced work on in 1945 after visiting the workshop of Fernand Mourlot in Paris on the recommendation of Georges Braque, these 11 progressive depictions show Picasso deconstructing the image of a bull from a realistic representation to one pared down to an essence of abstract lines. A recurring metaphor throughout his works, the bull in Spanish culture is seen as a symbol of power, virility and brutality and is sometimes viewed as a manifestation of Picasso’s perception of himself. 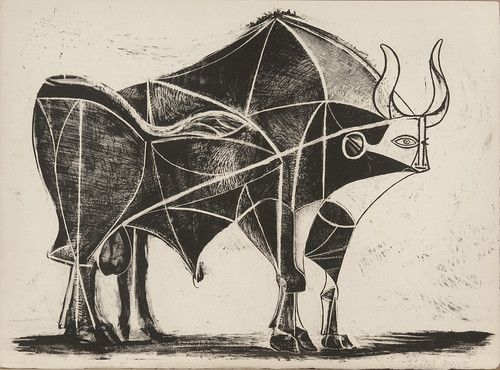 We follow the theme of transformation with Two Nude Women. Here we see Picasso inspired by Matisse and one of his great passions: women. The evolution of this work reflects how Francoise Gilot, the new love interest in Picasso’s life, gradually usurps his affection from Dora Maar and we are given a glimpse of this through each stage of his creative process. Tatyana Franck explains that by the last frame, Maar has been reduced to an almost Kafkaesque insect-like figure as Picasso had by then come to regard her as a tortured woman. 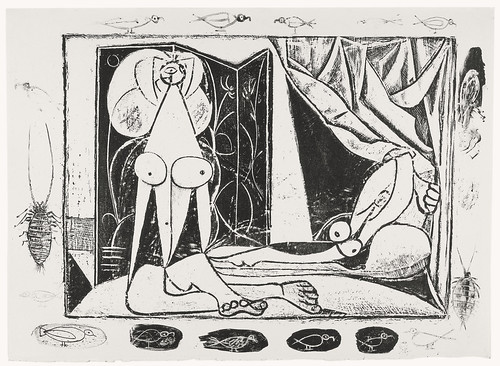 Picasso’s innovative spirit is evidenced in his multi-coloured linocut, Woman with a Hat in which he affectionately depicts his last wife Jacqueline Roque. Initially, Picasso had been reluctant to work in lithography or colour etching due to the laborious process of carving separate blocks of stone for each colour. Working in linoleum, however, allowed him to carve quickly and by 1962 he had perfected the technique of continuously cutting away at one block as each colour was applied. This required meticulous planning and the skill to envision the desired result. This print clearly reveals his mastery of the art form. 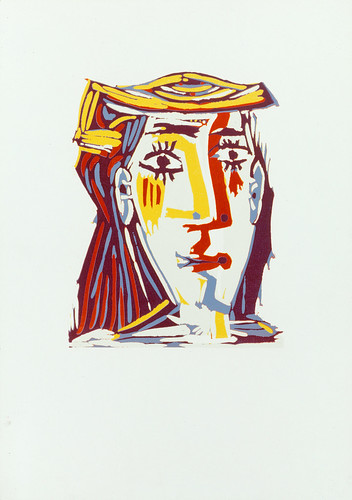 Notably, these works are unsigned. Picasso only put his signature to pieces intended for sale and these were meant for his own private collection.

Also on display are intimate photos of Picasso in his home and studio by the photojournalist David Douglas Duncan. From 1956 until Picasso’s death in 1973, Duncan was given unprecedented access into Picasso’s life and the photos open a window into Picasso’s later years.

In a Skype interview with Claude Picasso, he described how he was inspired by his illustrious father. Picasso was a risk taker in that he challenged the idea of academic art. He destroyed traditional conventions and reconstructed them with his own vision. As Fernand Mourlot remarked, “He looked, he listened, he did the opposite of what he had learnt – and it worked.”

SingTel presents The Mystery of Picasso’s Creative Process: The Art of Printmaking runs till 24 August 2013.

*Images compliment from STPI and SingTel.

Tuesdays to Saturdays: 10am to 6pm
Mondays by appointment only
Closed on Sundays and Public Holidays