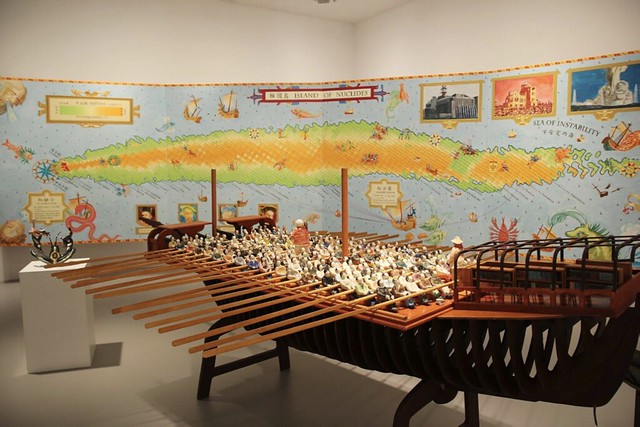 Nobuaki Takekawa’s first show in Singapore imparts an almost mythical feel as you step into a gallery surrounded by maps and pirate chests, and then encounter a large boat hovering in the middle of the space.

Born and raised in Japan, Nobuaki Takekawa was one of tens of thousands of Japanese who encountered the massive earthquake and subsequent nuclear accident of 2011. The events led Takekawa to question the rapid progress of a “Western-originated” world, and to reconsider the history of mankind and the origins of technology.

As you look at the individual artworks, you see that whilst the objects themselves appear to be from an ‘olde worlde’, an era past, there are many modern day references. Chocolate cookies nestle inside a pirate chest in place of the expected ‘pieces o’ eight’; a large 16th century-style map curves round the walls and is illustrated with the traditional elements of earth wind, water and fire, but shows land covered with a periodic table of modern day discovered elements. 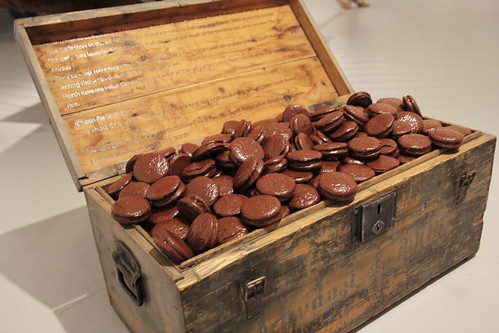 Over the past decade, the artist has been invested in suggesting notions of time and duration to his viewer in rather unexpected ways. Takekawa guided me into the back room to show me one of his wave paintings, where he explained “I draw and it takes time – this piece represents space and time. I am interested in history, in how we reconstruct histories.” He is highly attentive to idiosyncratic details and often chronicles patterns in nature–from a cicada’s eclosion and life cycle, to the harvesting of a sea cucumber. For him, these patterns are more than decorative features; they accumulate and unfold as exquisite records of personal, natural, and cultural histories.

Takekawa also showed me his unique revolving lantern sculptures, which project shadow images onto the surfaces, using heat as power to revolve, yet based on the form of the modern nuclear plant.

Much of his work is linked to the nuclear power accident in Japan. The artist shows through the enigmatic exposed skeleton of a drifting model galley (titled ‘Galley in the Age of Great Knowledge’) that in modern day, people research and study many things, but they do not know where they are going. The ceramic models aboard his ship are deeply engrossed in books, but not facing the direction of travel. They think they have control, when in fact they do not.

In his latest work, he has become preoccupied with sea creatures, waves, boats, maritime mythology and mapping. The ocean shapes his vision of the globe, as it both dissects and connects time and space. One stand-out piece was the ship-in-a-bottle shaped like a sea-cucumber. The delicacy and subtlety of this artwork meant that I did not even notice it at first, as it rested atop a small pile of sand in a corner of the gallery floor. I loved it’s modestness. This sophisticated and beautifully made sculpture spoke of two combined or rewritten histories: The ship in a bottle is an object of wonder, and one that could represent pirates, or refer to colonisation. The sea-cucumber is prolific on the seafloor of SouthEast Asia, where it is of course an edible delicacy, as well as having inspired thousands of haiku in Japan where they are called namako. 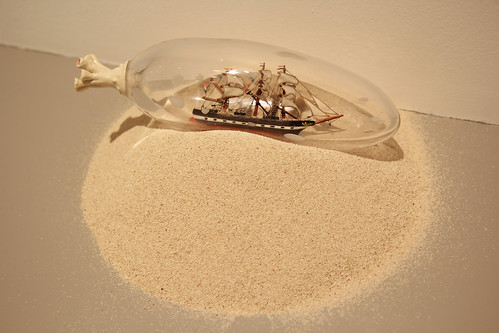 We can readily trace Takekawa’s selection of the individual object towards a broader comprehension of the world. I asked the artist about the unexpected chocolate biscuits, which he explained relate to the recent monetary crisis in North Korea, during which the South Koreans sent over biscuits. These had more value and significance to them than sending over money – it seems biscuits are the modern day treasures.

Overall, this is a great show to catch, particularly if you are looking for an artist with many layers of meaning and allegory informing his work. 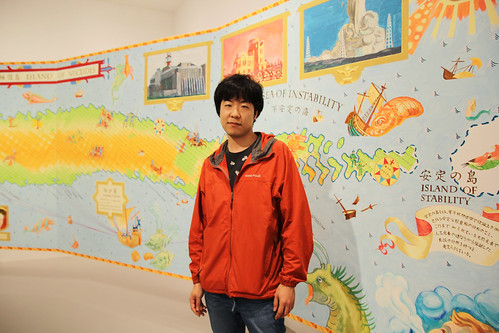 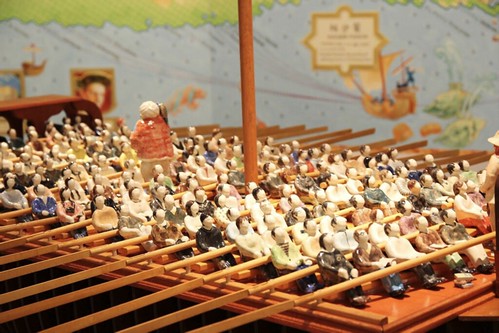 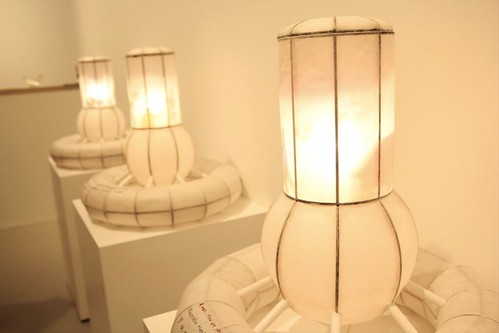 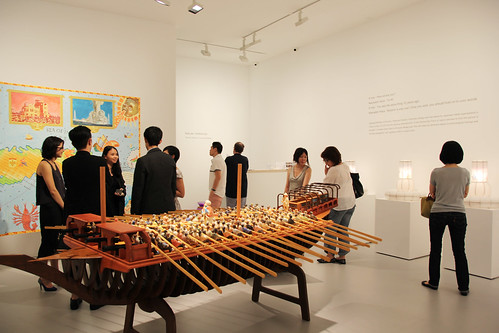 We Are Pirates of Uncharted History, by Nobuaki Takekawa