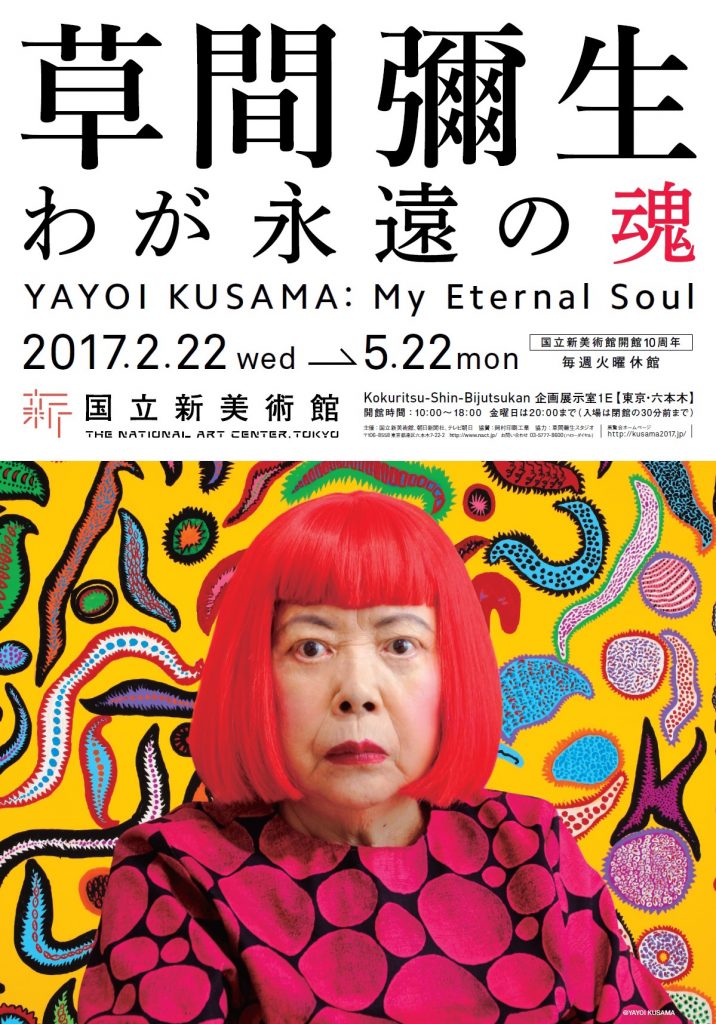 For those of you may not be familiar with the Queen of Polka Dots, aka Yayoi Kusama, here is some history on one of the premier artists in Japan.
Tweet

Writer, painter, sculptor, fashion designer and avant-garde artist, there is little doubt that Yayoi Kusama is the most famous Japanese artist to date. Born in 1929 in Matsumoto-shi, in the Nagano Prefecture of Japan, she studied traditional Japanese painting at the Kyoto Municipal School of Arts and Crafts before moving to New York in 1957 to pursue her artistic vocation.

Early in Kusama’s career, she began covering surfaces such as walls, floors, canvases, and later household objects and naked assistants with polka dots, which would become a trademark of her work.

It is hard to give only a few examples of the many highlights of her prestigious career, which include representing Japan at the Venice 1993 Biennale, receiving the Japan’s Person of Cultural Merit Award in 2009, the Asahi Prize in 2011 along with Japan’s Order of Culture award in 2016.

From the countless international exhibitions, her most recent ones include a major, global retrospect that toured the Reina Sofia Museum in Madrid, the Pompidou Centre in Paris, the Tate Modern in London and the Whitney Museum in New York in 2011 and 2012.

These exhibitions were followed by her debut in Central and South America at the Centro Cultural Banco do Brasil, MALBA in Argentina and Museo Rufino Tamayo in Mexico.

Another exhibition of her work, that toured a few Scandinavian countries concluded earlier this year.

Lastly, as Yayoi Kusama is an artist of many talents, it is no surprise that she has even crossed over into the world of mainstream fashion when she collaborated with the renowned French fashion house, Louis Vuitton.

So now, we shall move on to the exhibition, which is currently being held at the National Art Center, Tokyo which is in the midst of celebrating its 10th anniversary. As I imagine that they wanted a blockbuster exhibition, it is hardly surprising that the Center selected to showcase the works of Yayoi Kusama. National Art Center, Tokyo instead of maintaining a permanent collection is specialized in hosting various art exhibitions and has the capacity of showing large bodies of works, which may be difficult if not impossible to place elsewhere. I often have felt that, as the breadth of the work of Yayoi Kusama is so vast, that venues such as this one are crucial in attempting to give the visitor a comprehensive glimpse into her genius and thankfully the National Art Center, Tokyo did not disappoint in this carefully curated exhibition. 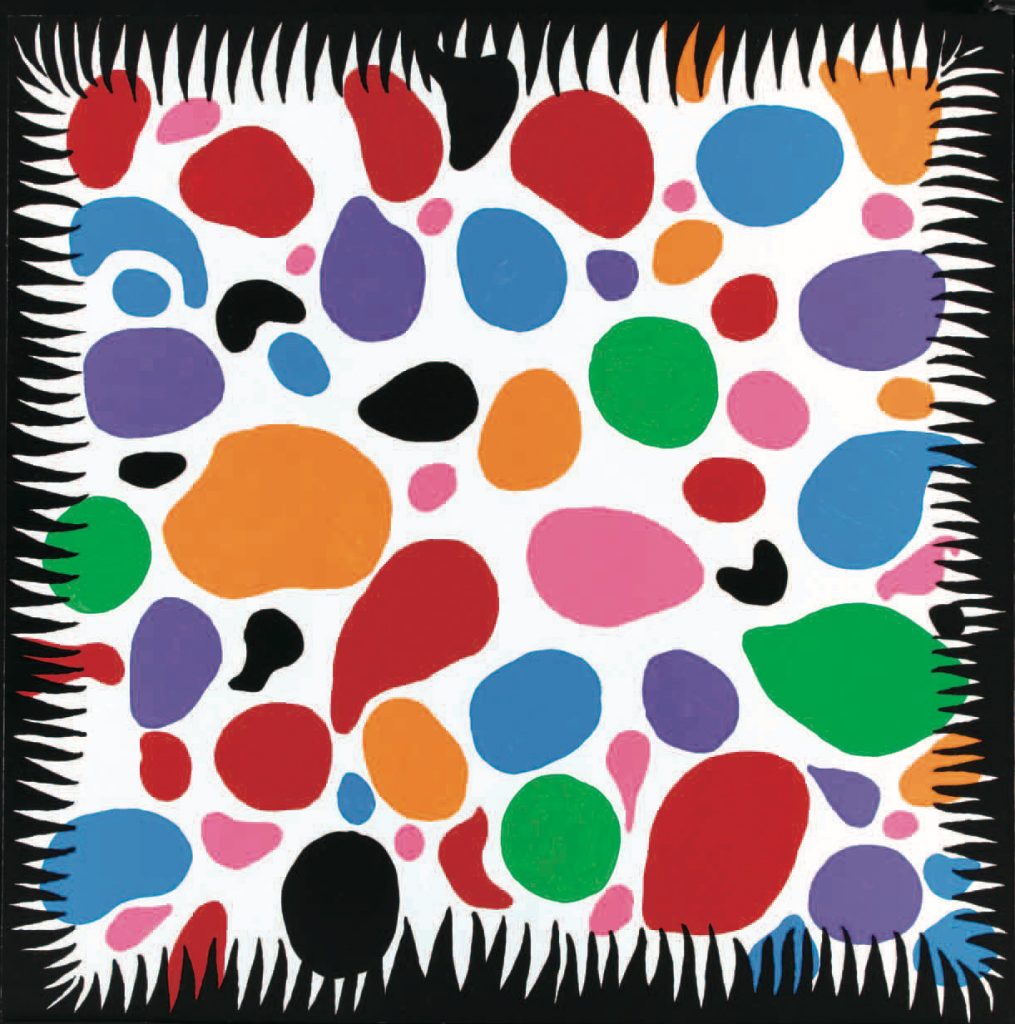 「My Eternal Soul」Series ONCE THE ABOMINABLE WAR IS OVER, HAPPINESS FILLS OUR HEARTS © YAYOI KUSAMA

I must admit that I really didn’t know what to expect as I had not spoken to anyone who had seen the exhibition so I got to experience it with fresh eyes, which in some ways can be a good thing as I was not weighed down by the prejudices and influences of others.

At the entrance of the exhibition, there was a small room that could barely contain a gigantic painting that depicted Mount Fuji accompanied by a lovely heartfelt message from the artist herself. The message expressed her gratitude and love of art, which could be felt throughout the whole exhibition.

The effect of so many works of art in such a large room was without a doubt, impressive. I must confess that my jaw dropped as I walked in. All I could do was wander about the room, aimlessly, trying not to walk into the giant sculptures, as there was just so much to absorb and appreciate. It truly was a case of immediate sensory overload but in the best way!

After this, the stunning display of size and colour, the rooms flowed in chronological order. The third room was a darkened room that contained early works from the late 40’s and 50’s. Here were early works that showed the nascent artist, searching for her own style and identity and whilst there were some that were not instantly recognisable as Kusama, they still contained the nucleus of genius that was to emerge and capture the world.

This room was followed by artwork from the 50’s that included her famous, white Infinity Nets pieces. A room filled with white and red paintings that I found to be extremely mellow and relaxing. Also present was her famous silver boat covered in phallic soft sculptures titled Aggregation from the One Thousand Boats Show and postal stamp works from the 60’s. This lead the way to some videos of her performance works from her time in New York.

Not to disappoint her many fans, was an Infinity Mirrored Room, where sadly no pictures were allowed! I have to confess that I went through it a total of 3 times! The effect never fails to impress and amaze! Something so simple, executed so perfectly produces an effect that never leaves the memory! 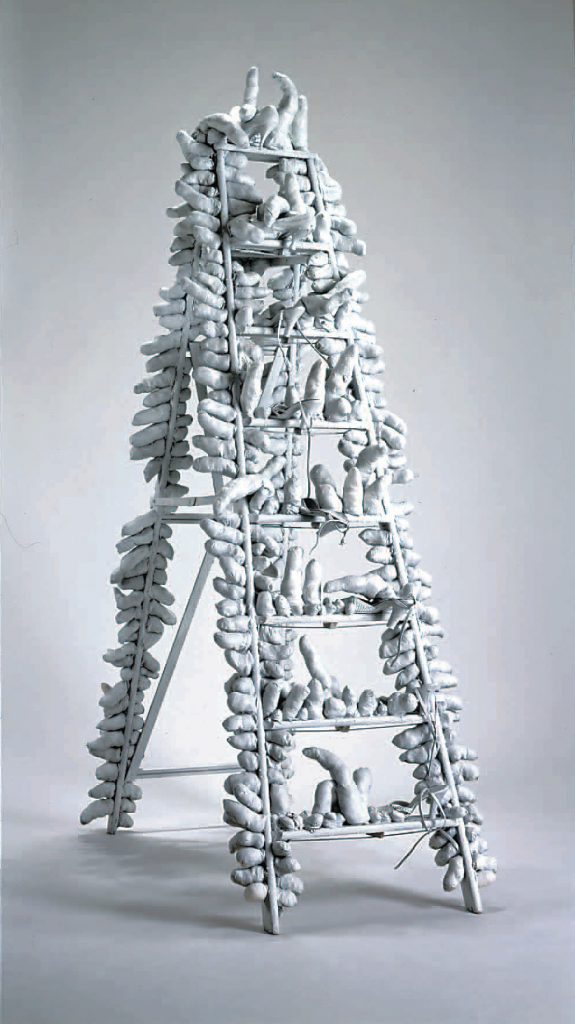 Also present at the exhibition were her, often neglected, works from the 70’s and 80’s, which revisit her darker works from the 50’s and include different media such as collage, pencil, gauche and pen on paper. These pieces always seems to play second fiddle to works on canvas but some might argue that more thought and attention actually went into producing these artworks and the selection of works curated here were certainly some of the best I have seen together.

After the darker period of the 70’s, the 80’s followed with mirrored installations, and larger format works on canvas.

The exhibition continued with selected works from the 90’s which made me take pause in amazement. Triptychs surrounded the viewer with an enviable quality of work that really demanded the attention of the viewer, even as it was nearing the end of the exhibition. Stand out pieces for me were Revelation from Heaven, Revived Soul trip and Yellow Trees.

The 00’s followed on from here and included some of her soft sculptures and furniture designs and culminated, perhaps unsurprisingly, with one of her famous trademark yellow and black iconic pumpkins.

Upon leaving the exhibition, I discovered two further wonderful surprises. One was an “Obliteration Room” where visitors were given a small packet of dot stickers and were instructed to place the stickers freely within a room that already was covered with dot stickers. The intent was to obliterate everything within the room with polka dots.

The last surprise was a giant pumpkin sculpture, located in one of the outdoor exhibition spaces of the museum, where anyone could and were posing for pictures. 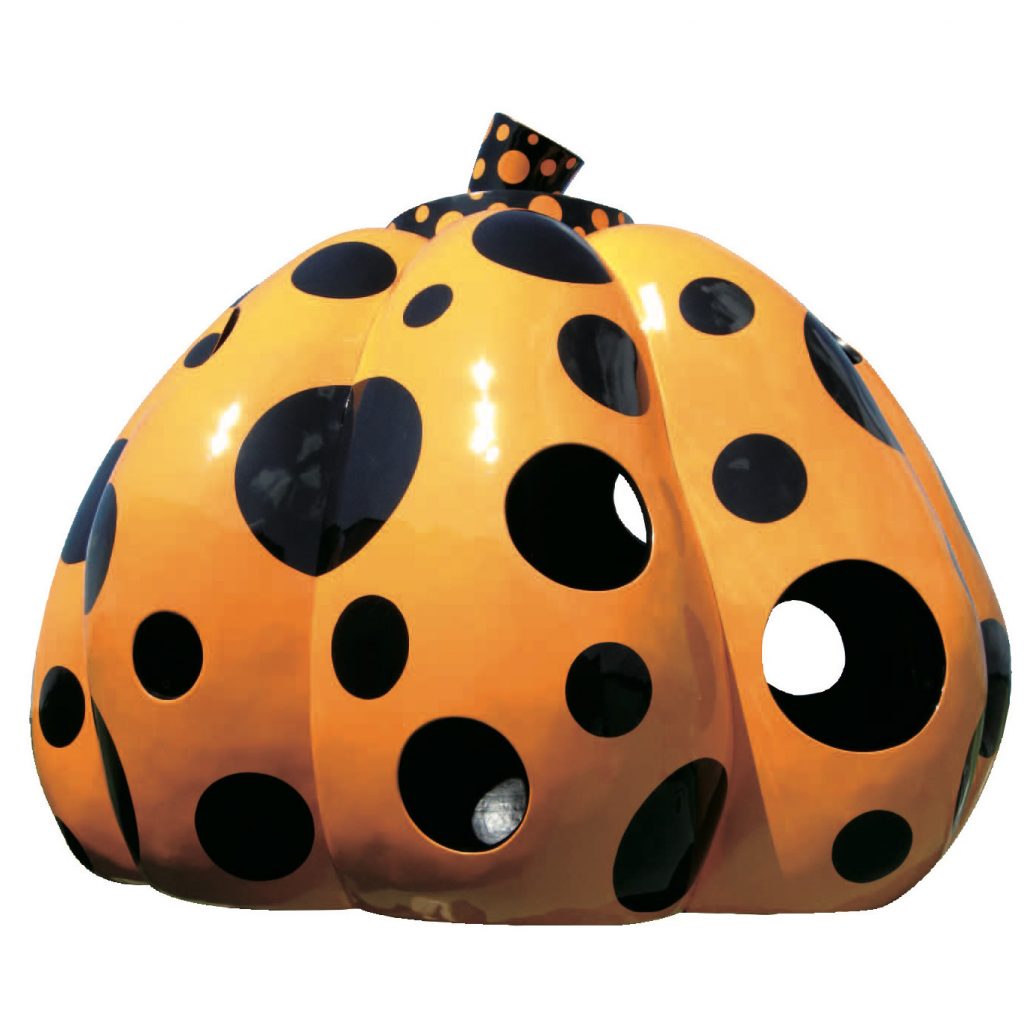 A Pumpkin, The Forever Museum of Contemporary Art ©YAYOI KUSAMA

The exhibition was a truly wonderful, well-rounded and comprehensive affair and by highlighting certain artworks I feel that I have slighted other pieces, but it simply is a must see exhibition. It clearly defines Kusama as the “complete” artist that has managed, throughout seven decades, to master and champion all different types of media. The bar has been set very high for all who follow!

Yayoi Kusama: My Eternal Soul remains on view until 22 May 2017 at the National Art Center, Tokyo.