Set in Siem Reap, a young woman, haunted by loss, mourning, melancholia and the imperfections of memory, dances with two men-one of whom she is married to, while the other is engaged to be married. – Wei Teck reports

“Frame x Frame” is a new film series initiated by The Arts House to showcase and explore the different dimensions of Singapore cinema. This quarterly programme is running from now till Mid December 2012. Good to see an Art Venue taking the effort to feature first-run screening of upcoming films as well as retrospectives of noted filmmakers. 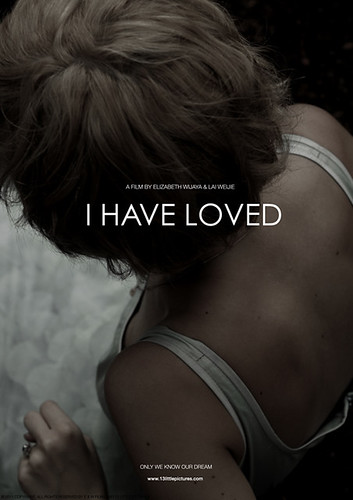 Set in Siem Reap, a young woman, haunted by loss, mourning, melancholia and the imperfections of memory, dances with two men-one of whom she is married to, while the other is engaged to be married.

Born in Singapore, English lass, Eryn Tett as “Marie” exude an unique aura. While local talent Glen Goei as “Harold”, a mature gentleman; with a younger opposite – “Amarin” played by Amarin Cholvibul.

Very stage-like presentation, with the characters doing individual recital within the film in vary scenes. The film was nominated for “Best Cinematography” at Silver Screen Awards 2011.

Like the art direction and the mood of the film, the music was captivating, romantic and yet melancholy, all qualities which kept the audiences’ senses occupied. “About You” was lovely song, sang by the actor Amarin, in the movie. Written by the actor, John Dang. I added a list of the crew responsible for the visual and audio of this film, at the end of this write-up, which the other reviews left out, simply because I am impressed by the result of their input.

I do wonder would the film be better as a stage performance. The film does give me an interesting experimental feel, with a good kind of creative presentation.

The story was not told in a linear manner, it went into loops of repeats of vary moments and locations, with variations. I can see that the two film-makers aim to have the structure to be organic. I am very certain the two film-makers will develop to be very good story-tellers.

About the Film Makers:
Ms Elizabeth Wijaya
Received her Master of Arts in 2011 and was a recipient of the National University of Singapore (NUS) Research Scholarship. She was awarded the competitive ASEAN Scholarships for undergraduate studies and graduated from the NUS with First Class Honours in English Literature, receiving medals for best student in her major in the Faculty of Arts and Social Sciences. She taught an undergraduate course in Film Art. She was the President of the NUS Literary Society. Last Stranger Under the Heavens, a short film she co-directed, was shown at the 30th Asian American international Film Festival.

Mr Lai Weijie
Graduated from New York University Tisch School of the Arts Asia with a Master of Fine Arts. He was on the Media Education Scheme scholarship from the Media Development Authority of Singapore. He graduated from NUS with an Honours Degree in philosophy. As a producer at Homerun Asia, he co-produced Homecoming. He was the director of photography for the short film Delilah, Before, which won Best Short Film at the 2010 Tribeca Film Festival. He was Singapore’s cinematography representative for the ASEAN-ROK Independent Cinema Project. The resulting collaborative feature, Rice-Asean Stories Weaving Tales, premiered at the 15th Pusan International Film Festival. He also co-wrote Sing the Blues, an independent feature inspired by a true story of a grisly murder that terrorised Japan in 2009.

Both film makers are currently part of a film collective in Singapore, 13 Little Pictures.

Currently showing at The Screening Room
Presented by The Arts House, as part of their “FRAME X FRAME” series