Always a big fan of “live” performance art, be it a dance recital, a theatre production, etc. Saskia Joosse found herself very fortunate to attend the preview of this year’s National Day Parade at the Floating Pavilion. Read about what this “art addict” feels about being part of NDP and her adopted home, Singapore.

I’ve always been a big fan of “live” performance art, be it a dance recital, a theatre production, a concert or even a parade and have always felt that sadly, parades never get the respect that they deserve. One of the reasons may be that they cater to the masses which I think, just in itself, is no easy task! Therefore, I found myself very fortunate to attend the preview of this year’s National Day Parade at the Floating Pavilion, for an exclusive peek into this year’s festivities.

The 47th National Day Parade started with the already eager spectators being entertained with select music that consisted of current international hits.

This was followed by the raising of the flag was tied by an NS man, passing on the duty of raising the flag to his son, who also was an NS man: this ceremony symbolised the passing on of our traditions and obligations to the next generation. 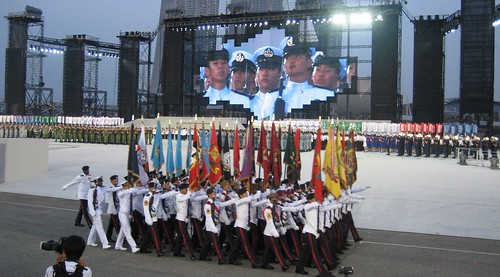 I don’t know what it is about men in uniforms that makes me want to “respectfully” salute them!

Parachuting out of helicopters from a great height and then landing with amasing precision were the Red Lions who captivated the crowd whilst the Integrated Precision Drill Team also showed off their death defying moves on motorbikes and the School Display Band motivated everyone with their music and coordinated routines.

To complete my sensory overload my ears were ringing with all the noise after the Presidential salute, Feu-de-Joie, sea salute and the flyby of nine F15 and F16 supersonic jets. 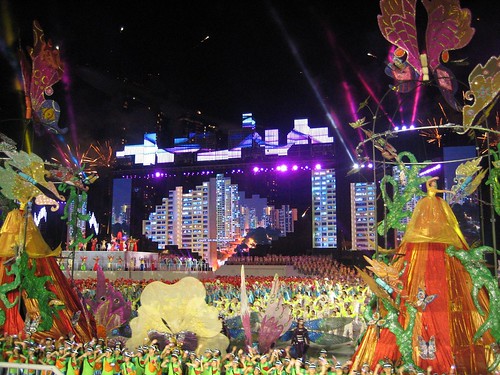 The evening continued with a spectacle of what seemed like an endless amount of costumed dancers filling the stage portraying the story of Singapore. This year`s show was called “Reflections” and was divided into four parts: Our Identity, Our Spirit, Our Love and Our Home.

The night ended when the crowd joined together in singing the National anthem that reverberated throughout the stadium as the sky was illuminated with fireworks.