In partnership with Sharjah-based Barjeel Art Foundation, the Singapore Art Museum (SAM) presents Terms and Conditions, a milestone survey of contemporary art by artists from the Arab world. The exhibition offers an insight into this emerging contemporary art scene and examines the challenges, ideals and current issues facing contemporary artists in the region today.

In partnership with Sharjah-based Barjeel Art Foundation, the Singapore Art Museum (SAM) presents Terms and Conditions, a milestone survey of contemporary art by artists from the Arab world. The exhibition offers an insight into this emerging contemporary art scene and examines the challenges, ideals and current issues facing contemporary artists in the region today. How artists probe these subjects are explored through a series of visual conversations that engage audiences across cultures, geography and time.

Their representations of a community’s hopes, desires and fears set within the larger sphere of political, economic, social and cultural forces speak to an audience beyond locational specifics. And while history and geography play a role, the artists’ voice and their interpretation of events transcends borders and cultures rendering the works relatable and timeless. 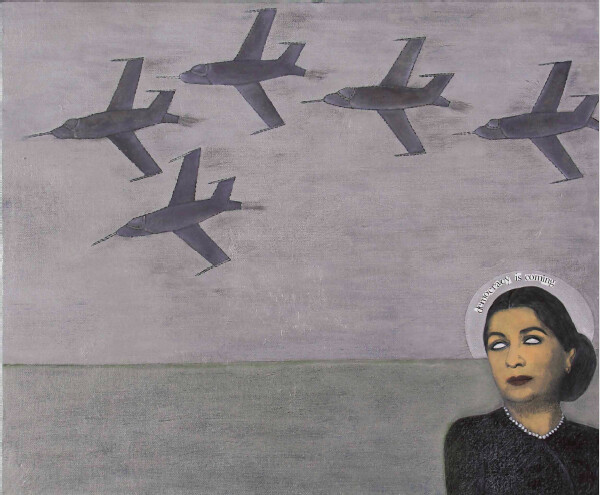 Of particular topical resonance are the works from the Egyptian artists. In Democracy is Coming (2008) by Huda Lutfi, one of Arab world’s most famous icons is depicted: Umm Khaltoum, an Egyptian singer, is represented as a saint with a halo around her head as fighter planes zoom across the sky above her. The juxtaposition of a personality with a fervent almost religious following with the ominous connotations of violence as depicted by the military jets takes on greater significance as this work precedes the Egyptian revolution that brought down then-President Hosni Mubarak. And in the light of the current political turmoil in Egypt, the planes are a reminder of who is in charge now.

Even more prescient is Raafat Ishak’s Nomination for the Presidency of the New Egypt (2012). Using painting and installation, Ishak presents a hard-hitting work examining the upheavals in Egypt. Using historical references and imagery, Ishak proposes a political party’s manifesto for a post-Mubarak Egypt. But while the manifesto promises a new future for Egyptian citizens, its relic-like display hints at an eventual ineffectiveness and a relegation to history; a poignant work given the present questions as to Egypt’s seemingly failed democratic experiment.

Dominating a section of another gallery are several large porcelain vases by Raed Yassin. In China (2012), the history of the Lebanese Civil War (1975-1990) is explored through representations of seven key battles. Following research of newspaper archives and interviews with members of the Lebanese militia, Yassin created a series of drawings which he then commissioned five masters from Jingdezhen, the porcelain capital of China, to recreate on mass-produced vases. The vases symbolise not only a collective commemoration where the severity of a brutal war has been romanticised but also the cyclical and eternal nature of conflict as reflected in the vases circular forms. Thus we are presented with yet another topical issue as we see Lebanon being drawn into the on-going Syrian civil war. 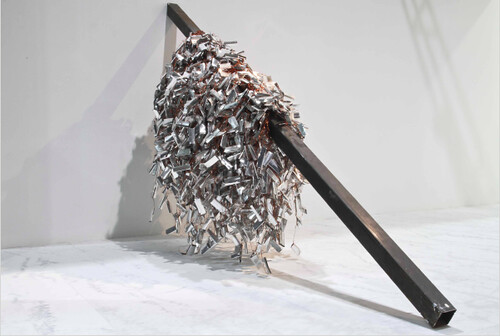 Born in Dubai, United Arab Emirates, Hassan Sharif tackles consumerism and environmental exploitation with his installation, Cow Belly (2010). Sharif’s practice involves a conceptual approach, one of the first Emirati artists to do so: Utilising pieces of aluminium that have been rolled up, tied together with a copper wire and then strung from a heavy iron beam, the metallic inanimate installation contrasts with the title’s reference to the soft body part of a living creature. The metal beam spearing through the tangle of aluminium pieces alludes to the degradation of nature by the forces of rapid industrialisation.

Fusing humour with social commentary is Sharif Waked’s Chic Point (2003). Set to heavily throbbing techno music, Chic Point – a play on the word check point- features angular male models stalking down the catwalk in wacky outfits that expose specific parts of their bodies. The video then presents a series of photos taken in the period of 2000-2003, showing Palestinian men disrobing as they approach Israeli checkpoints in preparation of being searched. The amusing and vaguely ridiculous fashions that had just been showcased now take on a more sombre overtone as one contemplates the reality of life under military occupation.

The 16 artworks in this exhibition are an attempt to break stereotypes and to present how contemporary artists’ draw upon their cultural and political past and present, whilst working within the terms and conditions of their milieu, to explore concerns relevant to us all today.

Terms and Conditions will run to 8 September 2013 at the Singapore Art Museum.