15 Finalists were selected out of the 130 artworks participated in this year’s APB Signature Art Prize. The result was announced on 17th Nov 2011, at the Singapore Art Museum.

15 Finalists were selected out of the 130 artworks participated in this year’s APB Foundation Signature Art Prize. The result was announced on 17th Nov 2011, at the Singapore Art Museum. Here are the winners: 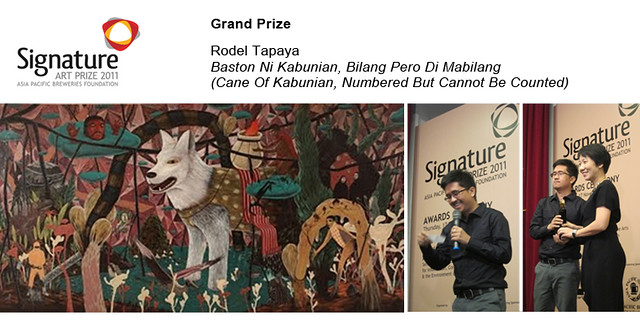 (Cane Of Kabunian, Numbered But Cannot Be Counted) 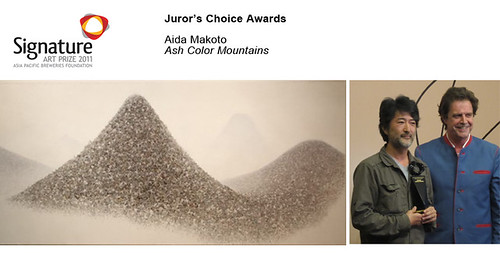 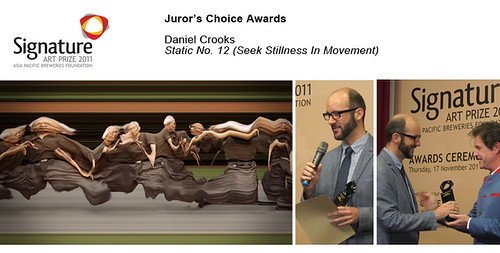 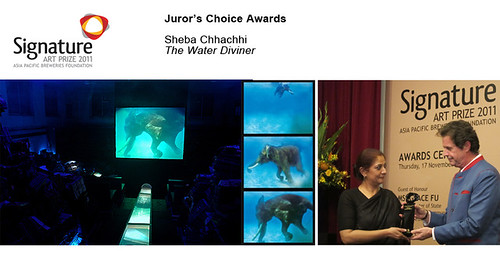 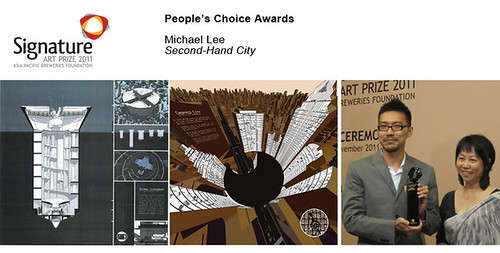 This second edition of the triennial APB Foundation Signature Art Prize has been expanded to include nominations from the whole Asia Pacific region. The 130 artworks were selected by 31 independent art professionals and curators. The prize amount to a total of SGD 85000 cash awards, comprising one Grand Prize (SGD 45000), three Juror’s Prizes (SGD 10000 each) and one People’s Choice Award (SGD 10000).

The winning artwork by Rodel Tapaya employs imagery from Filipino folklore juxtaposed with elements of modern day Philippines, commenting on pre-colonial myths, stories and cultural heritage while also commenting on current issues such as environmental destruction.

According to a statement from the jury panel, “Rodel Tapaya’s Baston ni Kabunian, Bilang Pero di Mabilang (Cane of Kabunian, numbered but cannot be counted) is a compelling and monumental-scale work. With its multiple narratives and diverse allegorical references, this stunning mural-sized painting embodies a vibrant strain in contemporary art from the Asia-Pacific region. While Tapaya does not shy away from drawing on the folklore of his native region, his is neither a naïve nor self-exoticising practice. The artist is audacious in his use of the Philippine mural tradition as well as Latin American magic realism and Bosch-like phantasmagoria. Anchored in a postcolonial setting but with far-reaching universal relevance, the work will surely provoke discussion about emerging aesthetic tendencies in Asia-Pacific. Together with the three Jurors’ Choice Award winners, the prize-winning works are ground-breaking in their negotiation of cultural heritage and contemporary forms of expression. They are all worthy of recognition as being among the best art works from the region.”

The audience at the award ceremony was treated to a short video of the 15 finalists’ works before the result was announced. It must have been a tough job for the jury panel as the artworks are highly competitive. Congratulations to the winners and also to all the participants. Taken collectively, the artworks demonstrated the thriving vibrancy of art-making in Asia Pacific today.

The Grand Prize was presented by Ms Grace Fu, Senior Minister of State for Information, Communications and the Arts, and Environment and Water Resources at the awards ceremony at the Singapore Art Museum this evening. Mr Roland Pirmez, Chairman, Advisory Committee and Member, Board of Trustees of the APB Foundation presented the Juror’s Choice Awards while Mr Michael Koh, CEO of the National Heritage Board presented the People’s Choice Award.

Singaporeans are in for a treat as the 15 finalists’ works will be exhibited at the Singapore Art Museum from now till 4th March, 2012. Do pick up a copy of the Activity Booklet when you visit the exhibition (for ages 13 and above), it will definitely help you to understand the artworks better and the viewing more enjoyable.