Singapore Art Museum’s newest exhibition, Time of Others opened on November 21, 2015. It is a survey of contemporary art from the Asia Pacific region and is a collaboration between the Singapore Art Museum (SAM), Museum of Contemporary Art Tokyo (MOT), National Museum of Art Osaka (NMAO) and the Queensland Art Gallery|Gallery of Modern Art (QAGOMA ).

The exhibition presents the works of 17 contemporary artists from the Asia Pacific region and  poses  the paradoxical question of how we can authentically and meaningfully conceive, understand and engage with other cultural contexts of society, while residing within our own localities, and being part of a globalised world today.

The title of the exhibition as well as the artworks in it are intriguing and a challenge to understand: but when looked at within their political, historical, personal or cultural context each work will resonate deeply with the viewer. The majority of the works are digital – photographs and videos, both of which have become a popular media for contemporary artists in this region. Of the more than 25 works in this iteration of the travelling exhibition, three works stand out for their unique concept and production. 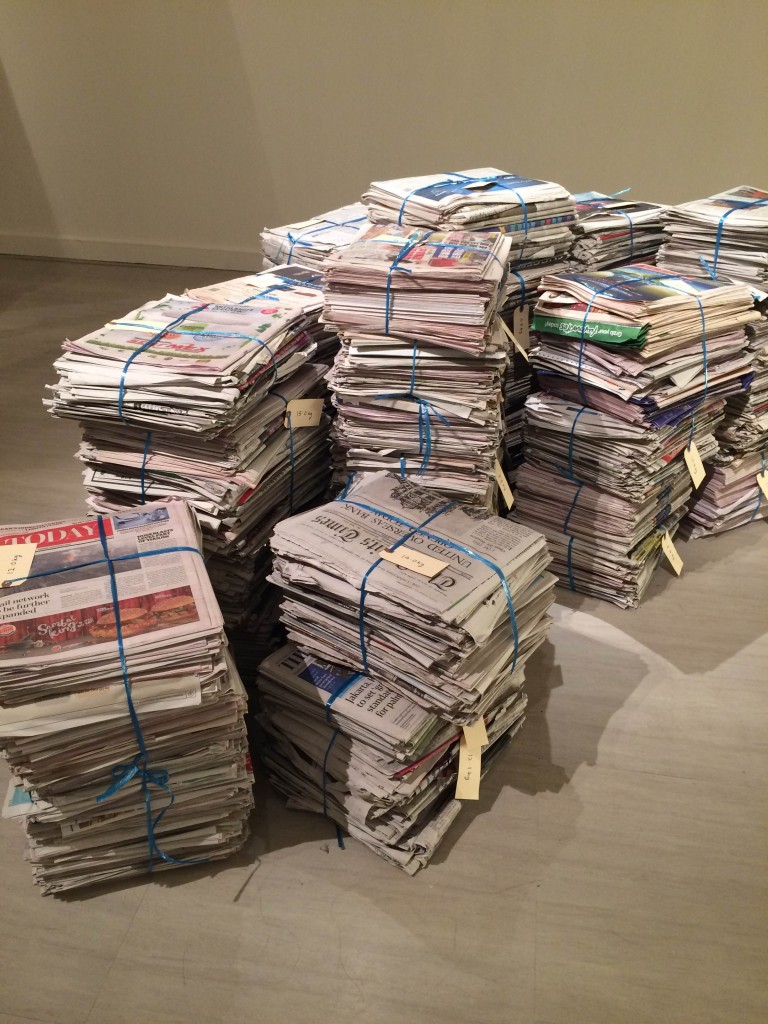 Thai artist Pratchaya Phinthong’s conceptually driven Give More Than You Take is an ongoing project that began in 2010 while the artist was on a residency in France. Learning about the exploitation of Thai workers to pick wild berries in Sweden during summer, he travelled there to work alongside them. The workers were paid in accordance with the amount of produce they collected and each day Phinthong texted the curator of the French gallery where he was to present his work, the weight of the berries he had picked with instructions to gather discarded materials of an equivalent weight to be his artwork. The project culminated in the form of a 549 kilos artwork – equivalent to the total weight of berries picked by the artist over two weeks in Sweden. 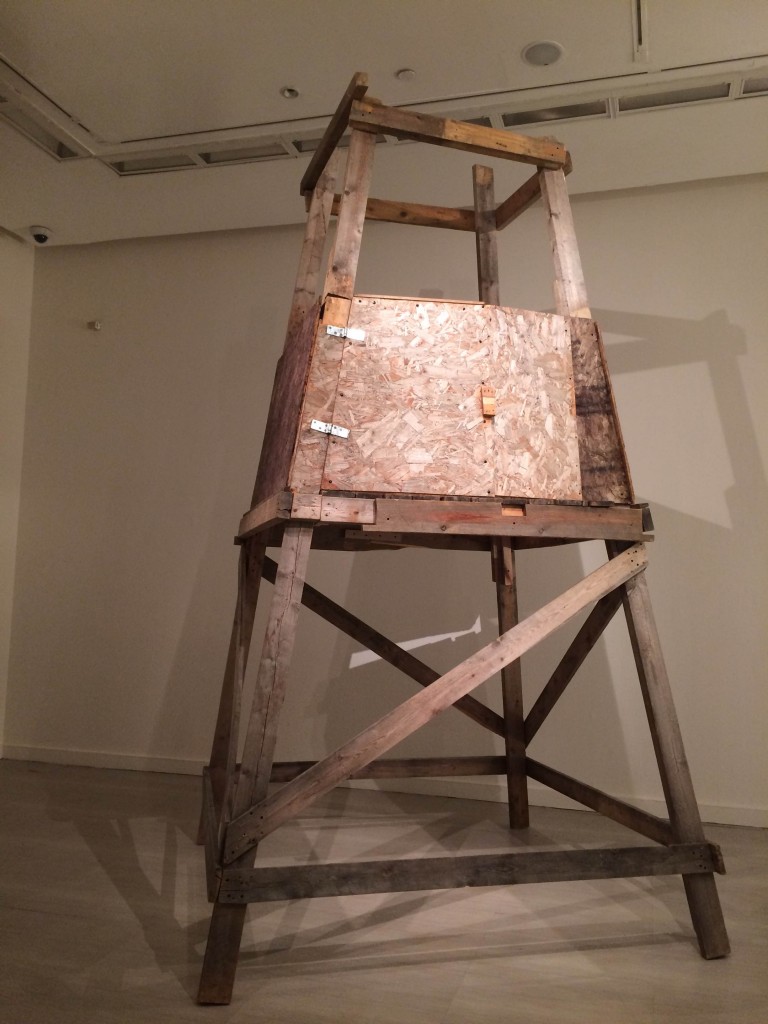 Phinthong and his group of berry pickers also took down a sighting tower that is commonly found in Lapland forests. The disassembled tower was then sent to the Gallery in Paris where Phinthong asked the curator to display it as he saw fit.

What is interesting about the work is that every time it is exhibited, it is different in terms of what makes up the 549 kilos of discarded material and how the tower is assembled. At SAM, the 549 kilos are made up of bundles of old newspapers that are often sold to the karang guni man. The sighting tower has been reassembled into the original tower and a video details the experience of the artist during his two months in Sweden.

The work, conflates the experiences of the artist and workers as well as the value of artistic and menial labour. Also, by leaving it up to the curators to select the material which is displayed to represent the weight of Phinthong’s labour and to assemble the tower as they see fit, raises the question of whose artwork is it? Does the work have to be created by the artist to be considered his or is it still considered the artist’s work as long as the concept is his? 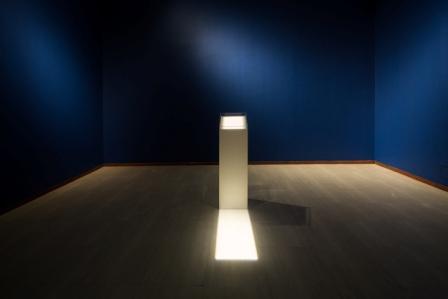 Taking the idea of artist, concept and artwork even further is  Danh Vo’s work 2.2.1861.  It is a letter hand traced by his father, Phung Vo which was originally written in 1861 by the French Catholic missionary Jean-Théopane Vénard (1829-61) to his own father just before his execution. Vénard, who was based at a mission in West Tonkin (northern Vietnam) was captured and imprisoned due to an edict from the Nguyen Emperor banning proselytising.

Phung Vo does not read French, but through the act of retracing the emotional letter from son to father, he makes links to his own father-son relationship, which is restaged over and over again as Phung Vo copies the letter for whoever wants to acquire one. 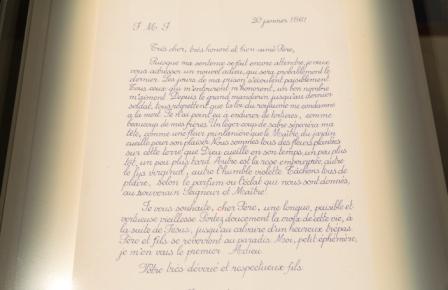 Vo’s re-purposing of a found material which held great emotional and historical significance at one time, and which has become a memento through his father’s act of retracing, into an artwork is typical of the artist’s oeuvre. Vo grew up in Denmark but was born in Vietnam in 1975, a time when the Vietnam American war had just ended and the Cambodian Vietnam conflict had began. His family left the country when he was four on a homemade boat which was rescued by a Danish freighter- a chance encounter which determined the new home of the refugees. Vo’s practice is based on exploring the consequences of such random encounters, the relationship between the past and present; and histories and identities forged and imposed. He often uses found materials with emotional or historical significance,lettering or appropriations of works by other artists to address these issues. 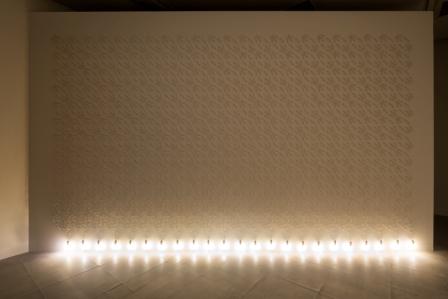 Jonathon Jones’ beautifully weaved installation is yet another example of an idea or design being the artwork and its production being left to others. The installation, lumination fall wall weave, consists of electrical cords which have been woven through a wall in repeated loops.  The design is modeled on the shape of the canoes used by the Cadigal people of Sydney Harbour and surrounds and the light bulbs that hang at the bottom in a long row just above the gallery floor are a reference to the campfires reflected on the water that were described by the first Europeans to arrive there.

The artist was inspired by his mother’s sewing practice and the communal activity of Aboriginal net-making for this work and for which he won the inaugural Xstrata Coal Emerging Indigenous Art Award in 2006 (an initiative of the Queensland Art Gallery). 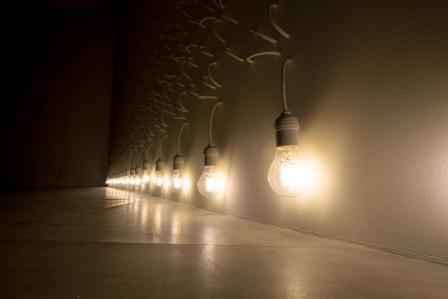 Jones often works with lights, shadows and the repetition of patterns and shapes from traditional and indigenous cultures to create his installations and frequently draws on collaboration to achieve outcomes.

Any collaborative work depends and draws on the knowledge and experience of its members to reach fruition, and this work too, which came only with a design sewed onto paper and instructions required the exhibition’s curators and project team to work together to create the site-specific installation.  The activity which lasted five days required teamwork and problem solving which created new meaning to the artwork.

As we see more and more contemporary artworks that challenge the conventional definitions of art (and craft), multiple questions come to mind: where does the art reside- in the inspiration, in the conceptualisation or in the production of the artwork? Does the artist have to produce the final work or can it be done by others? Whose work is it then? How does an investigation or an exploration become an artwork? Does its presence in the museum make it art?

Time of Others is on the third leg of its four museums tour and will be at SAM till February 28, 2016. It will then travel to QAGOMA in Brisbane.