The Centre Pompidou and Singapore Art Museum come together in a collaborated effort to present a blockbuster showcase of over four decades of video art collections. Get to know about this lesser known artform through the eyes of Artitute’s latest contributor, Mr Harry Zhuang.

*A selection from the Centre Pompidou and Singapore Art Museum Collections.

Visiting “Video, an Art, a History 1965 – 2010” was quite an experience for me. This was my first time attending an art event purely on Video Art. There were some that couldn’t really get my attention. But there were some that would make me sit there for a longer duration.

But these gave me a strong impression and made me curious and want to find out more about this artist and the artwork. Though it is quite obvious that the video is about the status of the female gender in the Japanese society in the past, it does make me reflect on how unfair women were being treated at that time as compared to today’s society. I hope Japan is moving out of the patriarchal tradition.

The other artwork in that section that interested me was Nam June Paik’s work. The splashes of colorful layers over the video and weird warping of image just draws you in and makes you want to sit there and watch the artwork for some time. But the funny thing is that I was more attracted to Nam June Paik’s work that is shown in the book placed at the ‘identity section’! (Love the Buddha series! I will try to read about them whenever possible.) 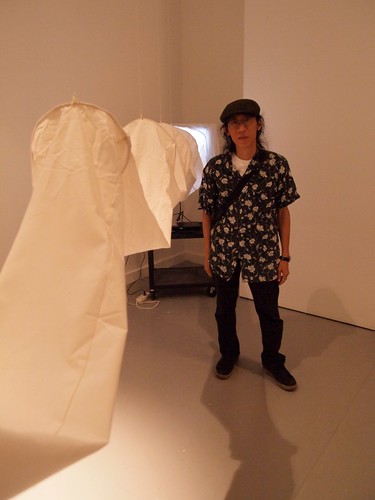 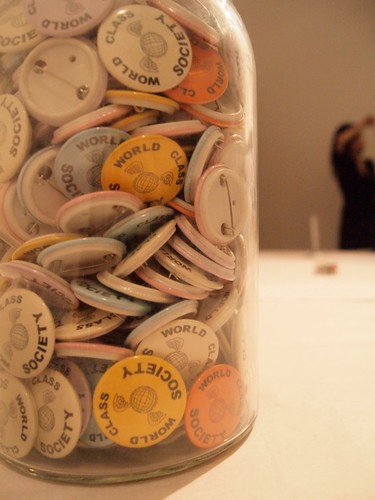 The other two pieces I really like were Lee Wen’s and Apichatpong’s artworks. Maybe it was because I read about them during my studies so I spend a great deal of time appreciating their artwork. Lee Wen’s “World Class Series’ felt like a series of sarcastic comments. And I really think it rings a bell within me. The idea that he used a long tube connecting to the video also makes the whole artwork fun to play with. I would think that this tube that we have to look through in order to see Lee Wen’s face does imply a certain message. Maybe he is implying that there isn’t a freedom of speech in Singapore, and his identity has to remain obscured. I am not too sure. 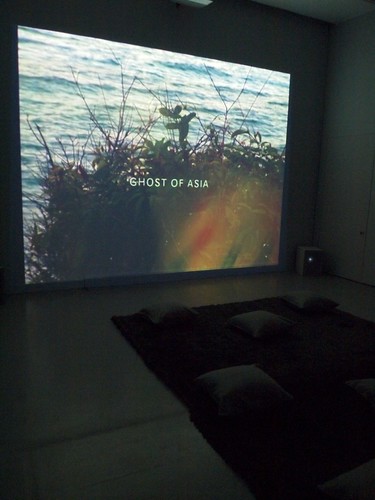 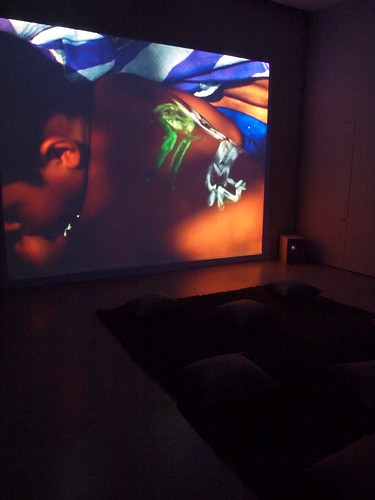 Apichatpong’s Ghost of Asia (2005) is one of the artwork where I spend most of my time. One of the reasons was because I had a chance to research in-depth on his films during my Asian Film History module and had grown to become familiar about his style and philosophy. The other reason I was attracted to it is because of the nice carpet and pillows which looked inviting. Ghost of Asia reminded me of his earlier work ‘Mysterious Object at Noon’ where he uses the exquisite corpse concept to create an experimental film.

Similarly in Ghost of Asia, the man performing the three boy’s ‘instructions’ reminded me of a playful way of making films. I personally like the mechanism of this video installation because it designs its space to comfortably lead the audiences to sit at the centre of the artwork. With one screen permanently playing the video of the man performing the ‘task’, and the other screen intermittently appearing when the task is performed, the audience’s focus is well lead from one screen to the other. The entire process felt fun because the audiences are constantly fed with a sense of curiosity each time the children gave funny instructions. The ending scene where the sun rises on both sides of the screen gives an up lifting feeling to the overall experience. But the title did puzzle me; such a playful film with such a heavy title. I did a research later and realize Apichatpong’s Ghost of Asia is made for a memorial tribute to the tsunami in Thailand. 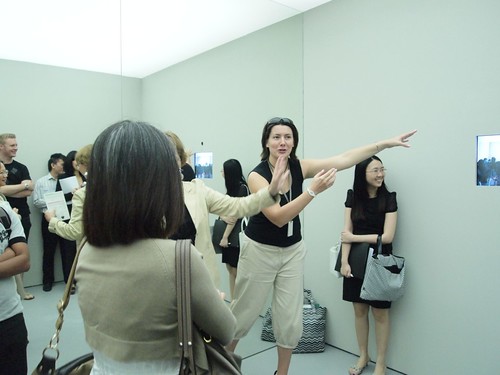 For the ‘Videotape to Interactive Installation’, the one I like most is Dan Graham’s ‘Present Continuous Past’. This artwork felt like a ‘time-base-mirror’. Like a mirror that reflects my image, this installation reflects my actions. The interesting thing is that when I look at my action that was ‘mirrored’, it felt weird. I can’t really identify why or how weird the feeling is, but the feeling of the present ‘me’ anticipating for the moments ago ‘me’ to arrives to the present was an interesting experience. It is as if the moments ago ‘me’ was a shadow chasing after me, but yet this shadow felt like a stranger to me, because it isn’t the present ‘me’. Maybe I am thinking too much, but I felt that the history ‘me’ can never catch up with the present ‘me’, because the present ‘me’ is constantly in motion, changing and evolving.

The overall experience of this event is really an eye opener for me. It has shown me how video artists were able to break boundaries and explored all sort of creative ways in using the video medium to create art. This makes me wonder that sometimes some of those highly unique films that we see in film festivals could have only been a fraction of what they had learn and explore in the realm of video art. And those video art artists are the true ‘Vincent van Gogh’ of the field of motion pictures. 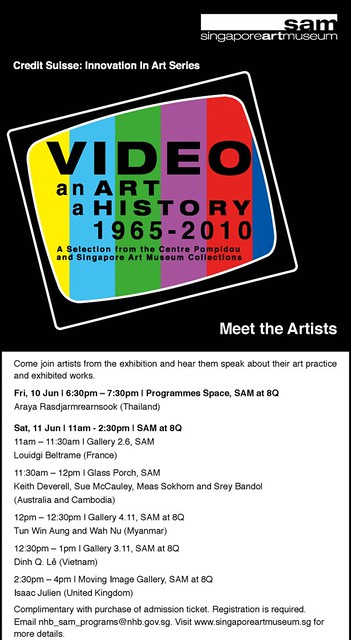 Harry Zhuang is one half of the Zhuang Brothers, upcoming animation filmmakers in Singapore.